I’ve had a good morning, thus far. I woke up at about 08:00 and got my things together. I loaded up the backpack and checked out of the hostel. I think what I’ll miss the most about Dundee is the people who live in the hostel. There are about five people that I know of, who live there full-time. Some are students, some working and some looking for jobs. Most of them are from Australia but I know that at least one of them is from Canada. They are a fun group and act like brothers and sisters, complete with wrestling and pillow fights.

I checked out, left the hostel and went to the mall and grabbed some hot chocolate and an almond crescent (am I even spelling crescent right?). The Wi-Fi there allowed me to check my email and update this blog. I love it… this is something that the hostel in Dundee could never provide. They’ve been having issues, apparently.

At the moment I’m on the train. I can tell the ride to Aberdeen is going to be beautiful. I think we’ll be on the coast for most of the ride. I just wish my seat was on the other side of the train. I’m on the land side, but I’m sure there will still be some great views. Even if it’s not the beautiful on this side- it was a cheap seat, so it’s all good.

We just crossed next to a golf course. It’s too bad that I’m not into the game of golf. Someone told me that the game was invented in Saint Andrews, Scotland and so some of the oldest golf courses in the world are here. Maybe such facts should excite me, but all I have to say is MEH. The only thing more boring than playing golf is watching golf. I do, however, enjoy trying to run over others whilst driving the golf cart… so maybe there is something there for me after all.

Aberdeen seems to be another nice little city. For some reason, the sandstone buildings here are grayer and less brown like in Edinburgh, or it could just be my imagination and the way the light happens to be hitting them.

My hostel is located out of the city and it was quite a hike. I’m guessing I just walked about 2 miles from the train station. That’s no big deal unless you happen to be carrying a big ole backpack. I’m pretty sure I burned a few calories on my way out here. When I arrived, there were two guys from Ireland who greeted me. Very nice of them, as they don’t even work here.

This time, I got an all-male dorm room. Usually, a mixed gender situation is cheaper, and so that’s what I’ve been doing up to this point (except in Glasgow where I’d booked my own private room). The disadvantage to this male-only room setup is the fact that the hallway outside my room smells a little bit like a men’s locker room. The lady at the front desk told me that there would be one other person in my room with me tonight, so here’s crossing my fingers that he isn’t a snorer.

My roommate is out now but I think he’s an American like me. This is because I see he wears Wrangler jeans (they’re hanging up- although they do sell Wranglers here in the UK, I’ve yet to see someone from the UK actually wearing them.) and also I can see a cell phone bill envelope with a return address of somewhere in California. Think I’ll get a wee nap.

I walked into the city to find something to eat, and I saw another La Tasca restaurant. This is the same restaurant that gave me the crappy service in Edinburgh. I thought I’d give it another chance. The exact same thing happened: I got my food and the server took off forever and even though I needed some more water, they wouldn’t even come to check on me- it’s so horrible. I do believe that I’m done eating at La Tasca for good. Two different cities- and the exact same customer service. What sucks is the fact that the food there is really good- at least what I ordered both times was very delicious. Never again… or until I get a craving that I can’t deny … whichever comes first. 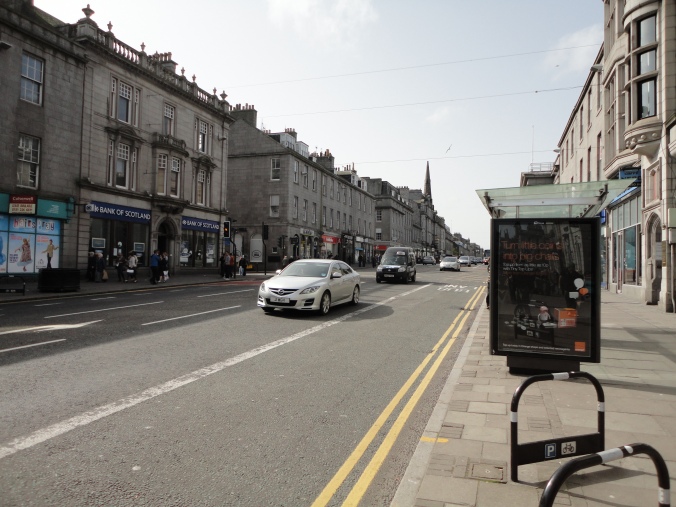 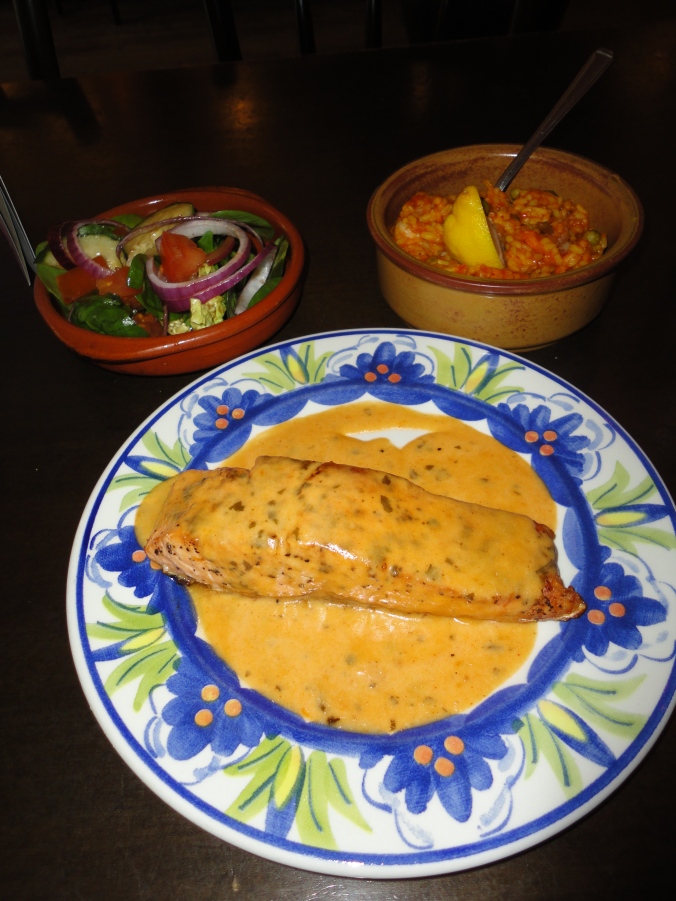 Today has been quite good! I started this morning with a search for breakfast. I ended up at Starbucks so that I could use their internet connection, so breakfast was a butter crescent, a blueberry muffin, and a white hot chocolate- healthy AND well-balanced (not really). I needed the connection because the hostel’s is still borked.

I wanted to go pick up my train tickets since I go further north tomorrow. When I got down to the station, I walked around looking at the Tay Firth. Next, I headed back into the city and soon found the Dundee High School (Ages 5 to 18) and kept that direction, heading up the hill. A few minutes I found myself on the top of Dundee Law, which is a hill that overlooks the city.

While up there, I met an elderly couple who told me that they used to live in Canada, but now they lived close to Glasgow. They were in town to see one of their daughters who lived here now, and the lady told me that it had been 40 years since they’d last been to Dundee. They were quite nice as they wished me luck on my journey.

After hiking back down, I wanted to find some lunch. I finally was able to find a place, near the hostel, called The Town Bar and Restaurant. Can I tell you that the food was great (I had salmon) but the service sucked big time? My server kept forgetting that I was there, and so when I’d order a glass of water, it would take him 25 minutes to get it to me. After a bit, a different server started took over for him, but she also kept forgetting me. I don’t require much attention or anything but just don’t forget I exist. That’s my only request. No tip for you!

Dinner was a restaurant called Papa Joe’s. I had some a goat cheese parcel, some garlic bread, and a huge piece of lasagna. I almost had to roll out of the restaurant, I was so full! The food was great and the service was so much better than I’d experienced earlier in the day.

I totally lucked out in Dundee. I didn’t have to share my room with anybody at all. Yay for traveling now, and not being here during the summer! I’m sure they would have been a lot busier, had I come in the warmer months. Very restful sleep here.
Tomorrow I’m off to my next destination.

I have reached my next destination safely. My train left Edinburgh at 09:28 and even though it was only about 60 miles, it took about an hour and a half to get here. Dundee is located on the Tay Firth… I think that’s what it’s called, need to do some more research. This is my first time here and it’s lovely. Way smaller than Edinburgh, but still has a city feel.

When I first arrived, I dropped off my bags at the hostel front desk and walked around a bit. I soon stumbled upon another cemetery and walked through, finding more family names. I’m such a nerd! My hope is that these family names will entice my parents into coming to Scotland someday. They’re very into genealogy, especially my dad.

I met a group of people from Australia who are living at this hostel for a full year. Two of them are working, while a third is looking for work. They seem very nice and invited me to play some football. I’d have joined them and gotten my butt kicked, but I needed a nap in the worse way. Part of me feels guilty for napping, this being my first time in Dundee, but the other part of me knows that I’m on vacation and it’s okay to get some relaxation time in.

After hanging out with the Aussies for a little while, I set out to find some dinner. It amazed me at how many restaurants this town DOESN’T have. I walked around for what seemed like an eternity (mostly because I was hungry at the time) and other than pub food, I came across one kabob shop. I wasn’t in the mood for that, so I kept walking. I ended up at a Turkish restaurant that was quite good. I probably spent a little more than I should have on dinner, but I can now say I’ve had Turkish food. 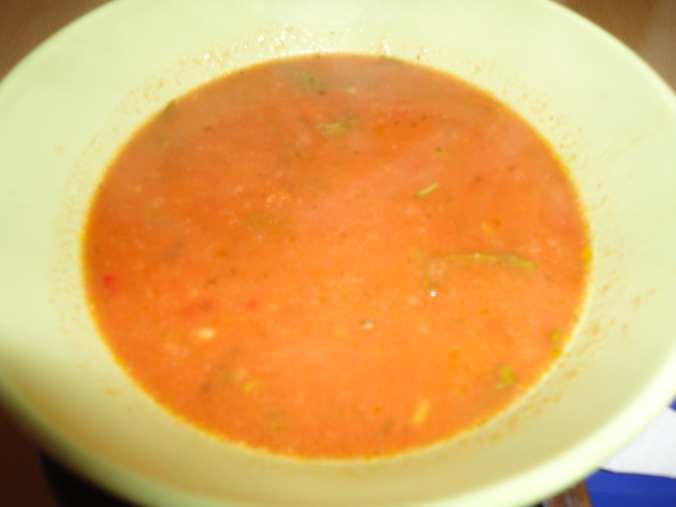 It’s looking like I may have this room to myself tonight. I thought that for sure I’d have at least a couple roommates tonight since there are eight beds in this room. I don’t think anyone else is even staying on this side of the hostel… that means my own bathroom and everything. Wahoo! 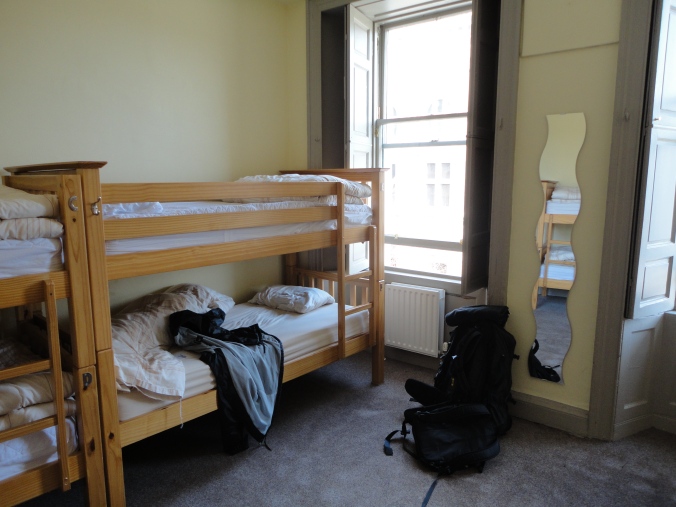