This morning, I had to take a bus and two trains to get from Dingle to Limerick. It was an early morning, and I guess I wasn’t quite awake, because as I was about to board the first train, I realized that I had left my large duffel bag on the bus! I raced across the parking lot to the bus station and told the attendant what I had done. She told me that this bus had already left to it’s next route, and so there was no way they could retrieve it until it came back to the Tralee station.

This is horrible! Now I only had the clothes I was wearing, and in my pursuit of the silver lining, I was thankful that I had my money, credit cards, and passport in my backpack, which I hadn’t left behind.

Then the attendant told me to cross over to the management office and give them a description of the bag, and I told her that it probably wasn’t worth it because I’m not finished up in Tralee I would be going to Limerick. She then told me that there was no way they’d send the bag to meet me.

I crossed the street, hoping that she didn’t give me the correct information. When I got to the office, I explained my predicament. A manager told me he’d be right back, and he walked over to a bunch of busses, leaving me near the office.

All of a sudden, the angels started singing and he came back with my duffle bag! The attendant was wrong. The bus hadn’t left, was just moved to the other side of the parking lot! I told the manager that he is my new best friend. He laughed at me, but I think it wasn’t a, “you’re funny” laugh. It was more of a, “bless your heart” style of laugh. I thanked him and ran back across to the train station, boarding my train about a minute and a half before it left the station.

Now I’m in Limerick. This is a cool city! I was slightly worried because the clerk at the Dingle hostel told me that Limerick was boring and I should have gone to Killarney instead. I’m glad he was wrong, but then again, it doesn’t take much to entertain me. Dinner was at Cornstore, which is a restaurant that I also at at when I was in Cork. Apparently there’s two locations. The Cork version was incredible (albeit a little overpriced). I thought I’d give this one a try. Amazing!

This morning I got a bit of a late start, as I was waiting to see if it was going to be a stormy day or not. There was some rain, but it only lasted for about an hour or so. Even though the wind was still mad, I decided to walk through town. I ended up at the marina on Dingle Bay.

After a bit, the wind just wouldn’t die down. I was getting sprayed with salt water. I decided that maybe it was another day that I was going to read from my book. I would have liked to go hiking on a proper trail, but it was still quite overcast and I could see storms in the distance. It’s best that I stay close, so I don’t get dumped on.

On my walk back to the hostel, and recorded another live video on Periscope. https://www.pscp.tv/w/baZAQDkzNzkzNXwxQmRHWVJSREFwWEpYKN8z45q-aM7GvEDtQ5tPJ3bmlwWvur_0MkU_b5jBews=?t=6s. It’s awesome that I’m starting to get a few more followers on Periscope. I like that the app pinpoints you on the map, and people who you’ve never even met can choose to watch your video and follow you.

Dinner tonight was at a really great seafood restaurant. I had some good muscles as a starter, and then two kinds of fish… I don’t remember what kind they were, but they were really good! I just had to take off the skin… it’s always too “fishy” tasting. 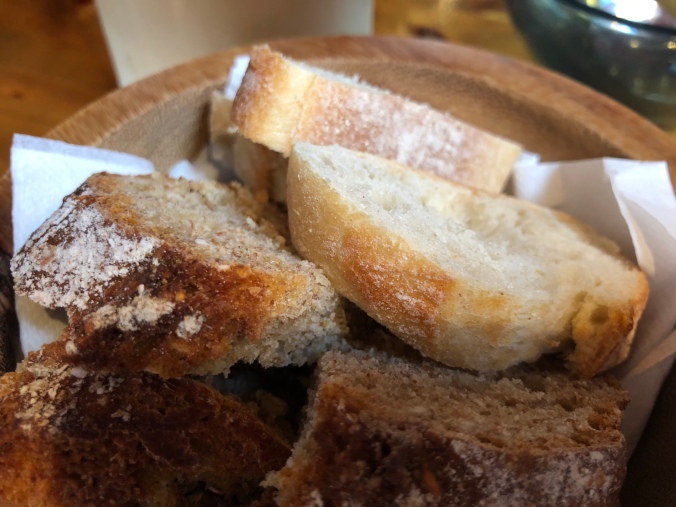 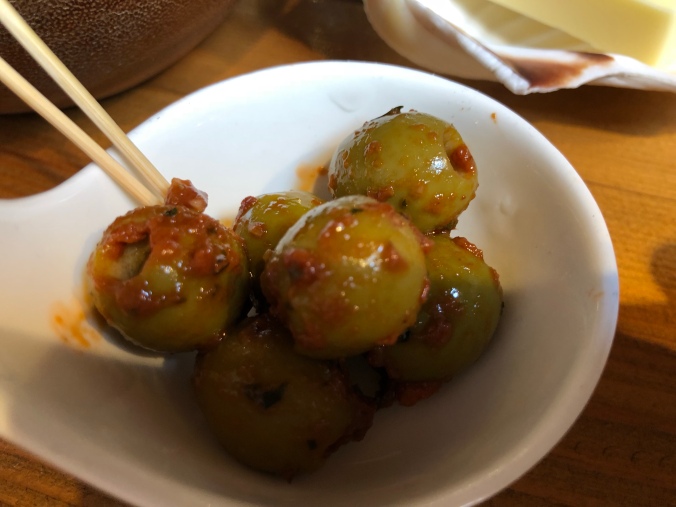 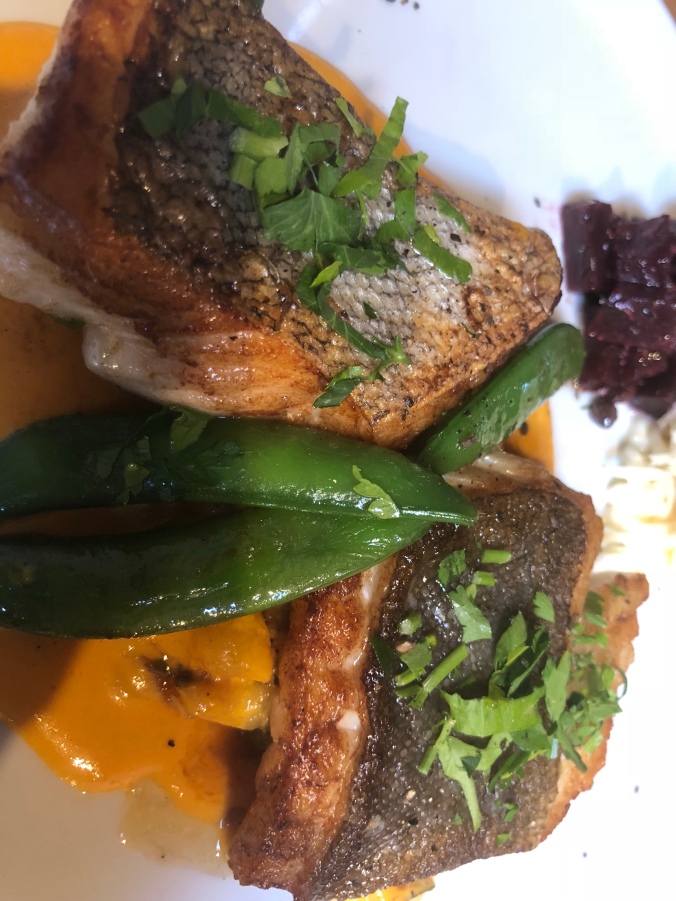 On my way back to the hostel, I took a few pictures of the homes and businesses in the town. I love all the colors! I leave tomorrow morning for my next destination, but I’d love to come back one day- hopefully when there is nicer weather. 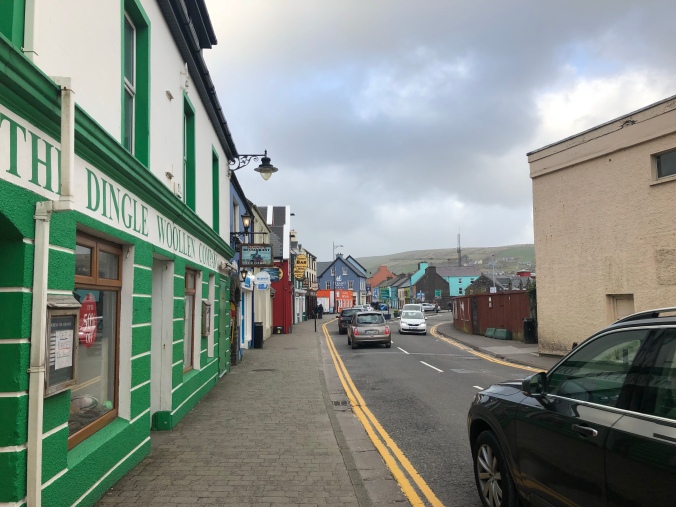 This next leg of my journey is my dear friend Colee’s fault. From the time I met her (in the late 90s, while living in Logan, Utah), she always said she wanted to go to Dingle, Ireland. This is because she grew up in Dingle, Idaho. When I was planning this part of my trip, I remembered her saying this. What kind of friend would I be if I didn’t get there before her and rub it in her face? To Dingle, I go! By the way, this is an item on my bucket list!

As with most new places that I visit, I didn’t Google any information. I don’t want the surprise spoiled. I’m pretty sure there’s not much going on in Dingle, though. I’ve been told it’s absolutely beautiful if I’m into hiking. Since I am, let’s just all cross our fingers that the weather allows me to do some exploring over the next two days.

The train doesn’t go all the way to Dingle. For this reason, once I get to Tralee, I’ll have to find the bus that will take me the rest of the way. I’m so glad I decided to keep my phone on during this trip. In the past, I really wanted to avoid any international fees with AT&T, so I kept my phone in airplane mode the entire journey and only connected to WiFi hotspots. I’m really not sure how I survived without my G.P.S. directions.

My train arrived just before the bus to Dingle was scheduled to leave. I was initially planning on waiting in Tralee for about three hours. This means that there is no time to get something to eat.

When I got off the bus, the wind and rain were so strong that my umbrella was instantly destroyed. I’m not talking about just being flipped inside out, but then a bunch of the little metal spokes (I don’t think that’s what they’re really called) got busted. My umbrella is now in umbrella heaven (or maybe umbrella hell, depending on the life it has lead).

I had no way of getting into the hostel, so I walked down the street and found a restaurant called The Wren’s Nest. I enter and order an egg salad sandwich. The guy makes it right there, over a little George Foreman-type grill. There was no kitchen to go in to prepare the food. He just did it right in front of me- it was the weirdest thing!