This morning I woke up with “Giants In The Sky” in my head. This is a song from he musical, Into The Woods. I don’t know why this planted itself into my head, but I laid there in bed and decided that I needed to hear the movie soundtrack. Then as I listened to this song, I actually go teary-eyed. I can’t explain why this happened, though music has often drawn me to tears in the past, but never this song before now.

I think Calli ditched me. Last night, before we went to our dorm rooms, she asked me if I wanted to go on some big ole four-mile hike with her. I told her that would be lovely, and she told me that we would leave at 08:00. So before I fell asleep, I set my alarm.

When I woke, it was only 06:00, but I’m normally an early-riser, so I didn’t think much. At about 07:00, I came into the lobby to sit for awhile, and use the Wi-Fi, since the connection in my dorm room is spotty. 08:00 rolled around and Calli never showed. So I made some herbal tea and sipped, waiting patiently. She never showed up. So, I decided to put on my shoes and head into town to find some breakfast. I purposefully ate fast, because I didn’t want Calli to wonder where I was, or if I was still interested in the hike.

Lerwick is very windy and cold this morning. There is some kind of storm blowing in, and my trip to breakfast was a lot of holding on to my hat, so that I didn’t lose it. I walked out onto one of the docks and took a few pictures and shot a quick video. I love this so much! It’s already haunting me! If I was a better writer, I would make this the location of a story.

I come back and took a shower, but still no Calli. So she is either still asleep (but we went to bed before 21:00), or she woke up early and ditched me. I am not going to jump to any conclusions, but that it what it’s looking like. She is actually the one who invited me on her adventure today. No worries, though. I think I’ll throw on my coat and hike farther up the coastline.

My attempt to hike farther didn’t really work out. The wind just got worse, and the rain was colder. I stayed inside and watched a movie instead. This has be a little bit worried because I’m supposed to fly out tomorrow afternoon, and I don’t know the size of the plane I’ll be on, and if this wind could delay or cancel a flight. If so, I may end up stuck on Shetland for a bit. I know the harsh winds have also suspended the ferry service, so I could very well be stuck on the island. I’ll definitely be crossing my fingers that it’s safe to fly!

Well, I spoke with Calli tonight and it was all a misunderstanding. I heard she wanted to leave at 08:00, but what she said, or meant, was that she was going to wake up at 08:00 and leave here at 09:00. I probably just missed her by a few minutes when I got back from breakfast.

Part of me is glad that I didn’t end up going with her, however. She told me that the wind and the rain was so miserable and she actually lost the trail for part of the time. She said that there were parts where it was steep enough and so windy that she had to literally crawl to get to the top. That sounds a bit miserable, but also adventurous. You know I would have been there recording her crawling up that hill, so maybe it’s best that I wasn’t able to go with her. Haha

I’m getting things packed because it’s time for me to go to my next destination, that is, if I can get the flight out tomorrow! It sounds worse than it is, though. This wouldn’t be the worst place to be stuck- especially when there is so much more of the island that I need to explore still. Otherwise, it will have to happen on another visit. 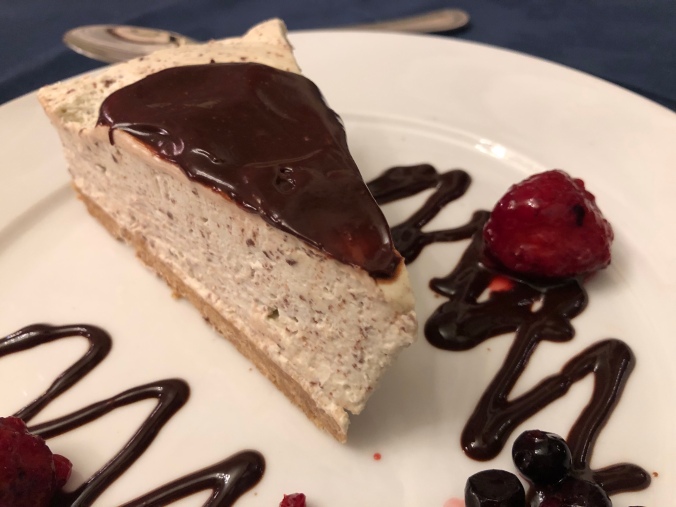 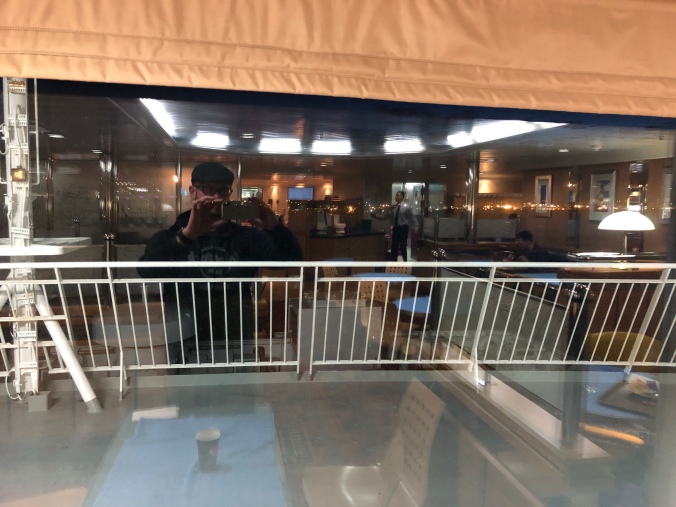 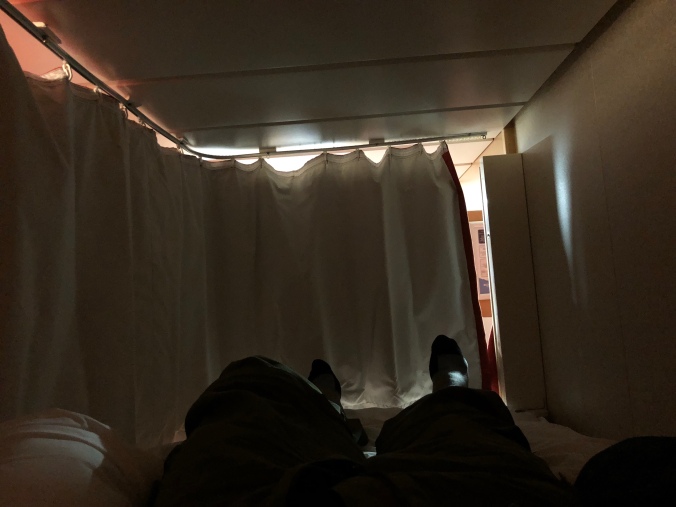 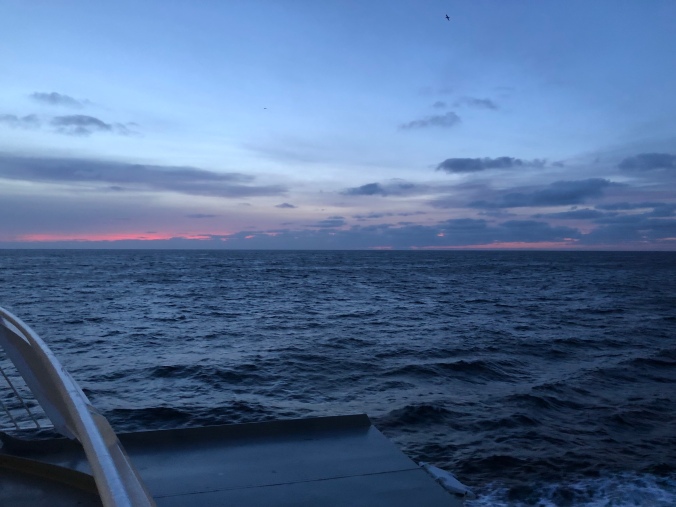 Lerwick is a great little city! One that I’m happy to be visiting for a second time. I walked to the hostel, and after waiting a few minutes, a girl called Calli joined me. We sat for awhile and had a wee chat. Calli is originally from Ft. Worth, Texas, but is currently studying in Germany. She had spring break and decided to come for a visit to Scotland. We decided to walk into town together explore a little bit. We ended up being out and about for what was probably a couple hours. I tried to get an “Ussie”, which is how I describe a selfie with more than one person, but Calli has turned out to be one of those people who doesn’t like to have her picture taken. For now, until she lets down her guard, you’re going to have to take my word that she really exists. 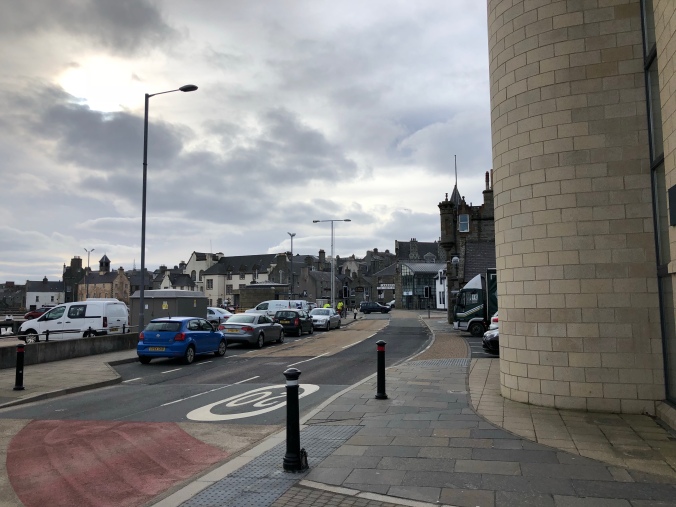 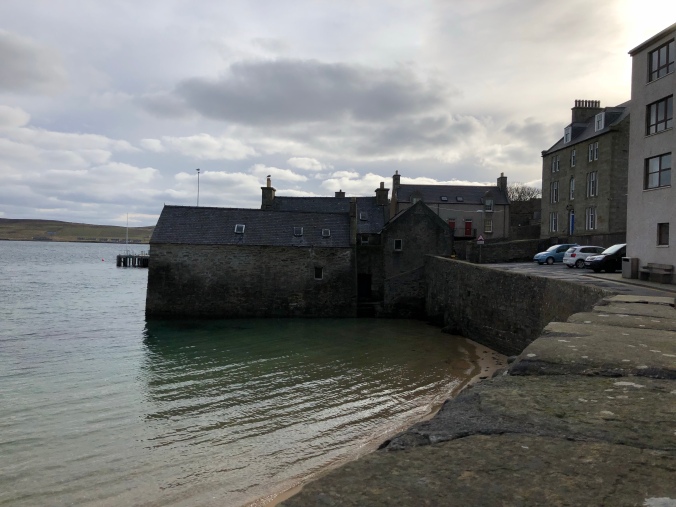 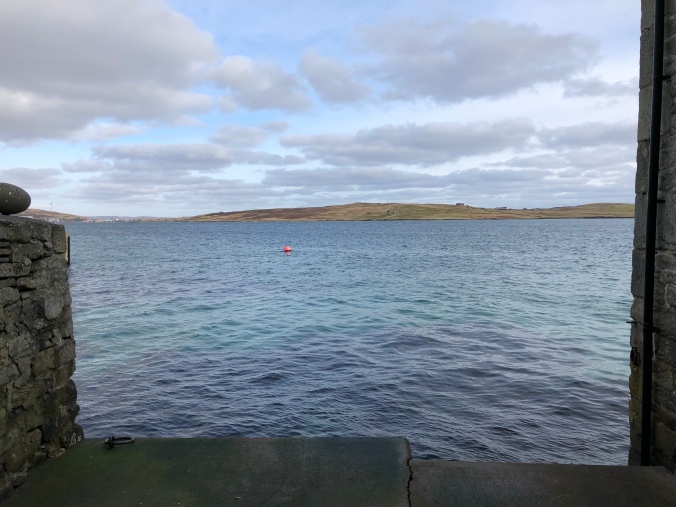 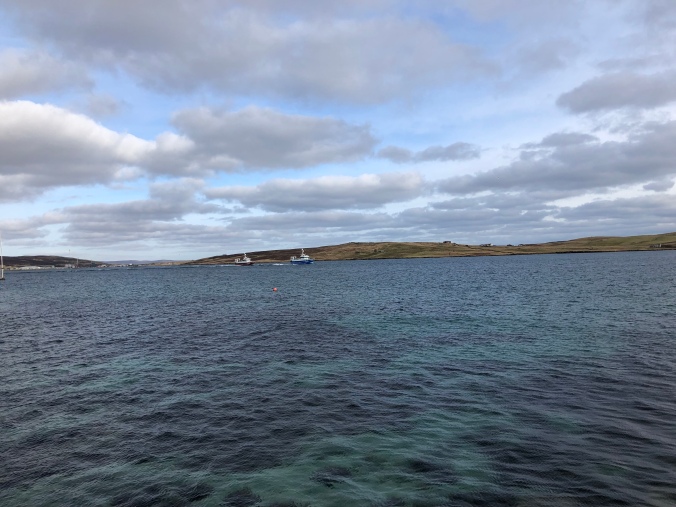 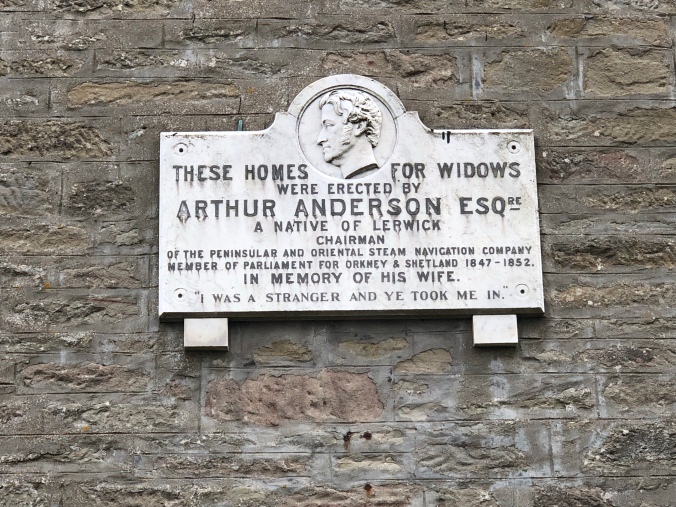 This place is so incredibly beautiful! Next we went to a local museum which taught us all about the history of these islands. Fun fact: Did you know that the only reason that Shetland is part of the U.K. is because someone was going to marry an English princess and the king and queen had no dowery, and so they said to the groom… here, have some islands. 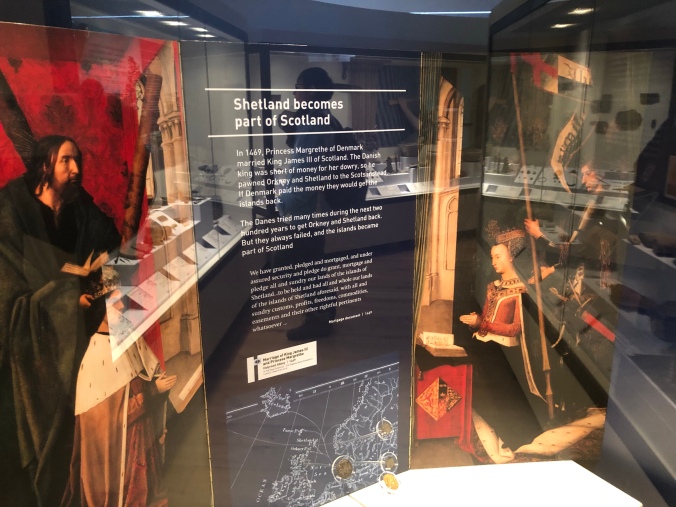 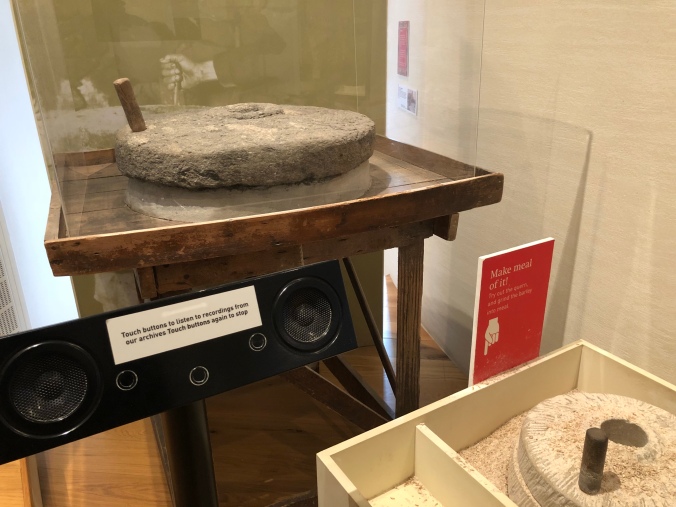 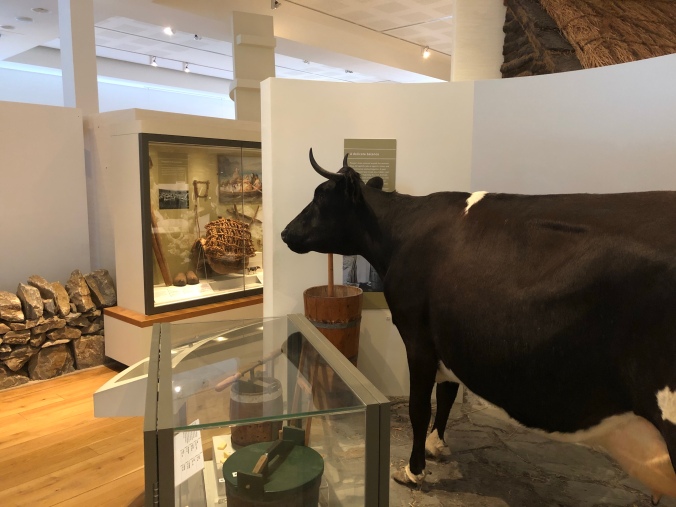 Next, we walked over to check out Clickimin Broch, which is the remains of what they think may have been a smaller castle/settlement. It’s old enough that they don’t really know for sure what it was. It was so fascinating to walk around, and even crawl into one of the chambers. 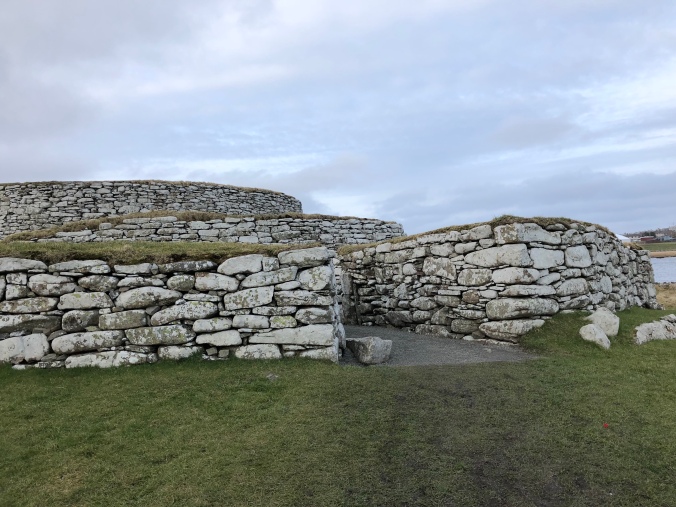 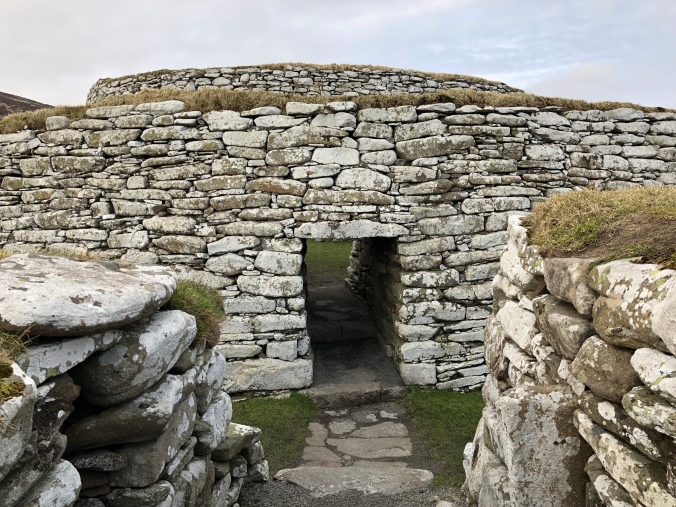 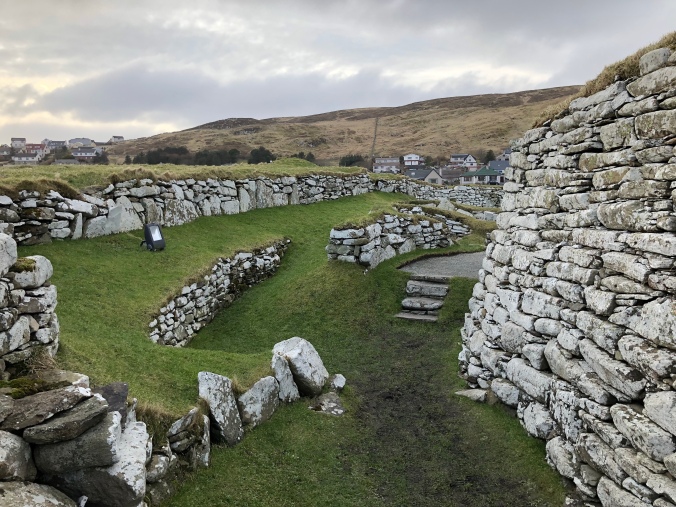 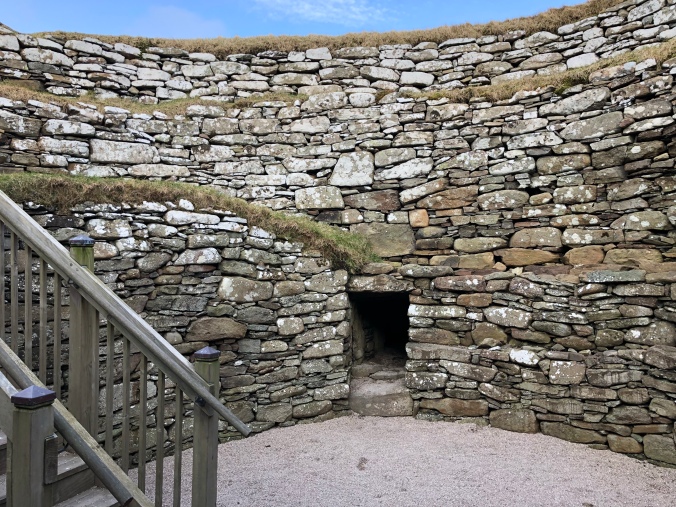 Dinner was at the Queen Hotel. There’s not a whole lot of restaurants in this small city, but the male was some kind of stuffed chicken with buttery mash and vegetables. It was probably the best meal I’ve had thus far on my journey. Just incredible!