Last night I had a great time getting together with some of my dear friends from my Utah State University days. This was the group who I went with to the United Kingdom for the very first time, back in 2002. These are the people who I blame for this stupid obsession that I have with Scotland. We needed to get together, have some ice cream, and reminisce about the old days. We called this our London Reunion.

We met at the Leatherby’s on 5400 South. When I arrived, Colee was there with her husband Jonathan, and James had brought his son Luke (James’ wife Heather was feeling under-the-weather so she was at home with their youngest). We chatted for about 10 minutes until Dave and Dominoe arrived as well. Missing from the original London group was Makaylee and Julie. It’s sad when real life happens. We wished that everyone could have attended.

We didn’t really talk a whole lot about London. We did share a few memories, including James’ attempt to navigate causing us to end up on the wrong coast of Scotland. At first, he denied that it was his fault, but we pretty much ganged up on him. My memory of this experience is falling asleep in the van and waking up to David telling us that we had been headed in the wrong direction.

We talked for about 45 minutes to an hour and it dawned on me that I hadn’t actually seen Dave and Dominoe for over 7 years (apart from Facebook)! This is horrible! I need to be a better friend! To remedy this, it was suggested by myself that we try to get together once a month, but they all argued that once ever three months would work better- since many of them have kids and lives and schedules and stuff to do. So hopefully we can get something set up in December, and if we’re lucky, maybe we can get Makaylee and Julie in attendance! 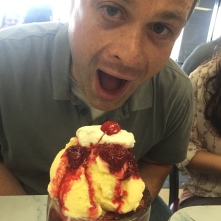 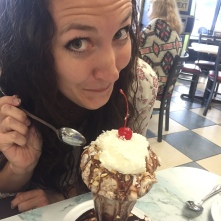