When I was a new flight attendant, one of our hotels was so far into the downtown area that you could practically throw a rock and hit the famous arch, not that I would ever do such a thing. Then, for years we weren’t even close to downtown, one hotel in Westport, and I don’t remember where our other hotel was.

One of my favorite downtown St. Louis memories: I walked around the city, looking for breakfast. I came across an old-looking diner that was somewhat run-down and looked like it hadn’t been updated since the 50s or 60s. I walked inside, and one of the servers even had a bouffant-style hairdo. I thought that I had discovered some kind of throw-back, 50s-themed diner. On further inspection, I realized that this was just who these people were. This wasn’t a show or a theme restaurant.

There was one long grill that sort of reminded me of the setup of a Waffle House kitchen. The oddest part of this whole experience was that the lady standing behind the grill held a spatula in one hand and, on the other hand, a lit cigarette. She’d flip someone’s pancakes and turned to take a drag off the cigarette. Next, she would turn someone’s eggs and again take another puff. This was seriously like The Twilight Zone in my mind. The best part of this story is the fact that I couldn’t taste her cigarette smoke in my grits and eggs.

Dinner tonight was at a restaurant called Charlie Gitto’s, Italian food that has been here for over 30 years. I told the hotel concierge what I was craving, and this is the place that he sent me to. I ordered some muscles and order of lasagna. 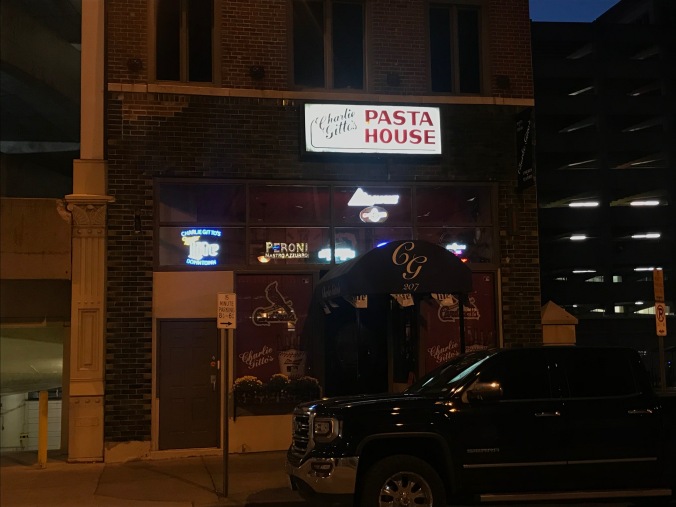 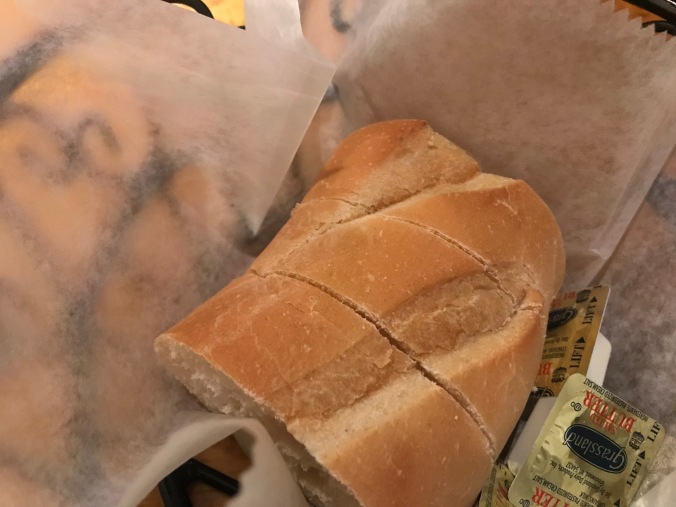 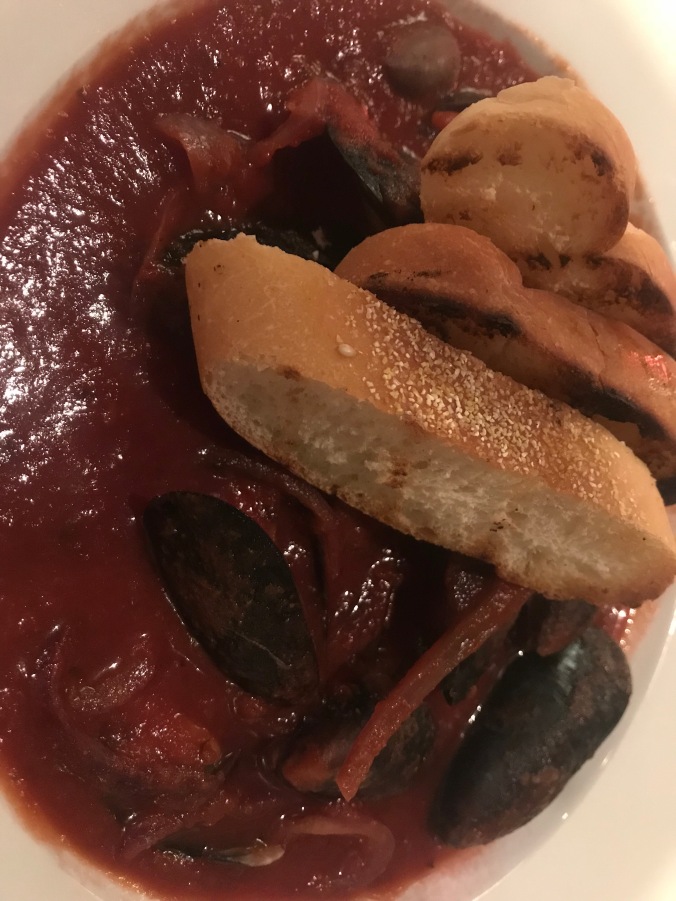 The muscles were just ok. Nothing wonderful, though.

The lasagna more than made up for the lacking muscles! Next time I’ll just get the lasagna. 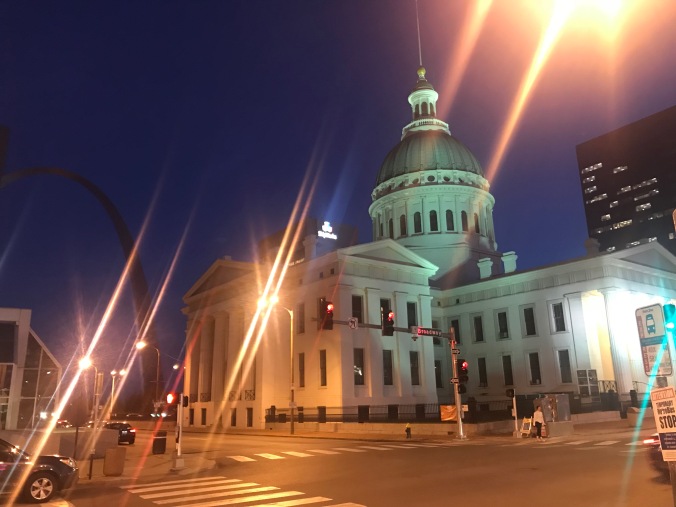 A beautiful scene on my walk back to the hotel. See the famous arch in the background? 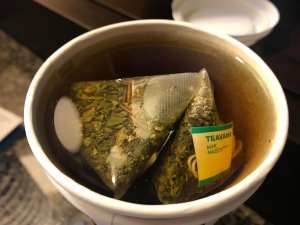 On my way back to the hotel, I stopped in the hotel lobby Starbucks for some herbal mint tea. I think that we really underestimate the power of herbs. This is perfect since the nights are getting colder, and I really wanted to sip on something terrible for myself. This is actually how I show supreme control over my cravings since I really just wanted a hot chocolate.

When I got to my Tampa hotel, it had just dawned on me that I hadn’t eaten any solid food yet that day. That explained why I had a horrible stomachache and had the shakes. To be honest, I had such a great morning working with my crew on our flight from St. Louis that I didn’t even think about eating.

This was a Dallas-based crew and among them was a gal named Jacky, who was hired in 1976, or in other words, when I was one year old! The company wasn’t even formed until 1971, and so as you can see, she is one of the first! She is such an awesome person! Unfortunately, she has run into some hard times in her life recently, and all I’m going to say is that I am so glad that I can count her as a friend! We had a long and heartfelt chat.

I feel that sometimes too many meetings and interactions are dismissed as mere coincidence. Both Jacky and I feel like this meeting is more than happenstance. I plan on keeping her in my life!

My pain of hunger was soon relieved, and I walked down the street to the Waffle House. I have been to this location before, so I’m not allowed to count it as a new one for number 100 on my bucket list, which is to eat at 100 different Waffle Houses. It was still delicious, and I got my usual fiesta omelet with a side of grits.

After filling my belly, I walked to a nearby cinema and saw Murder on the Orient Express. The movie was fantastic! It was pretty different than I thought it would be. My only complaint is that so much information was thrown at me all at once that I will probably have to go see it again. I guess I’ll wait for it to get to Redbox.

One of my favorite burger spots is Bad Daddy. It was great to grab 4 of my crashpad roommates and drive to Thornton for some “family” bonding. Sometimes life in a crashpad is stressful and makes me want to pull all of the hair out of my head. I’d swear that some of my roommates have never lived away from mommy and daddy’s house. I’m not going to mention any names because I know a couple of these offenders occasionally read this blog.

On the flip side, there are these times where we’re really bonding as a group, and it does feel more like a real family.

I’ve said it before, and I’ll keep saying it- I love days where I only have to work one leg. It makes this P.M. shift a little easier to handle. Passengers are less likely to drink in the mornings and are therefore less likely to make stupid choices. I ended my day in Kansas City, Missouri. Thursday night was a slam-click since I was dog-tired.

We finished our Friday, just before midnight. My co-worker Brooke and our first officer (whose name I don’t recall) met for a late dinner at the hotel bar. It’s always great when crews get together off the plane, although it’s weird seeing them in regular clothes. I ordered a Cuban sandwich.

This morning I set out in a Lyft to go to the mall. The four-mile drive literally took my driver 40 minutes. He was getting so into whatever he was talking about that he kept taking the wrong turns and the ride ended up costing me so much more than it would have. The kicker: His G.P.S. was right, but he wasn’t paying any attention to it! No tip for you! I complained, and Lyft gave me most of my money back.

When he finally dropped me off, I walked around for a bit (this counts as a workout). I bought some new shoes (I may have left a shoe in one of my hotels last week, and I need two, you see), and I saw Justice League. Turns out that this may be the best D.C. Comics movie so far… at least I think so.

It’s time to get ready for work. I’m posting this now since I’m not done until late tonight, and I’ll probably forget if I don’t. Here’s to hoping for safe/quick flights and passengers who don’t want to drink, only sleep!