Today it finally feels like springtime (at least it does in Stromness)! As I left my hotel this morning, it was perfect! Just a slight breeze, but no need to wear anything bigger than a light jacket. This is the part of Scotland that I’m excited for- hopefully I won’t have to wear my scarf any more.

Sadly, I only spent one night here and am now headed back to the mainland. I haven’t done a whole lot of exploring today, because I had to do laundry. I’m out of socks, and I’ve been wearing this same pair of pants for the last 3 days. That means it’s overdue. This is a great area, and there’s so much more that needs to be explored.

Instead, I sit in the the terminal, even though my ferry doesn’t leave for a couple hours. I already walked down to the CoOp to buy some laundry soap, and I’m not in the mood to drag my big ole backpack anywhere else. So today is going to be a movie day. Once I leave on the ferry, it should only take about an hour-and-a-half to get to Scrabster. 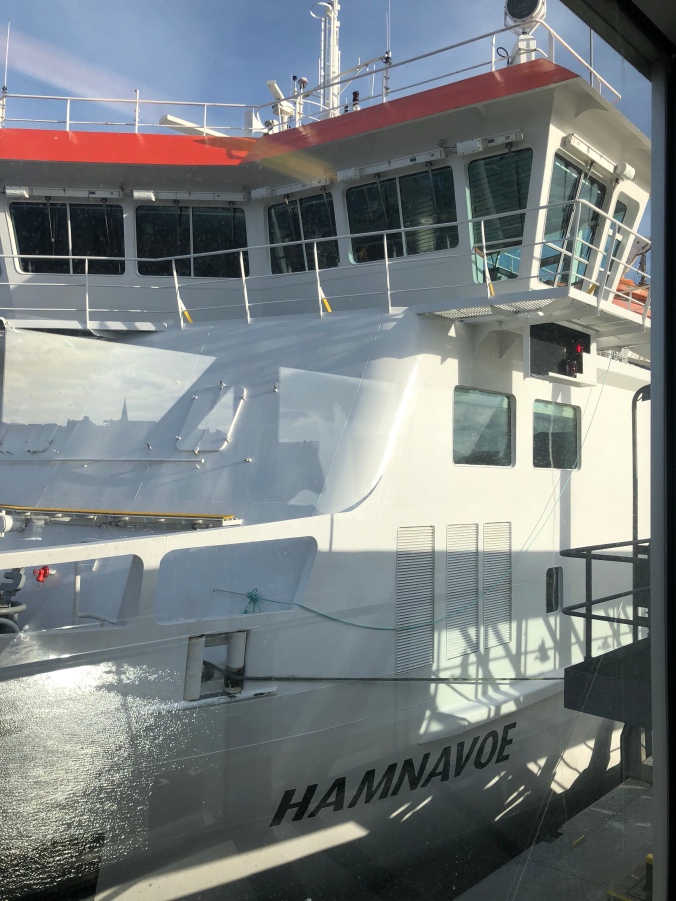 It’s so great to be back in Thurso! When the ferry arrived at Scrabster, I decided to walk all the way into Thurso. The walk was a pretty good workout, since I had my huge pack on my back. While making my way down the road, it was great to call and speak with my parents. 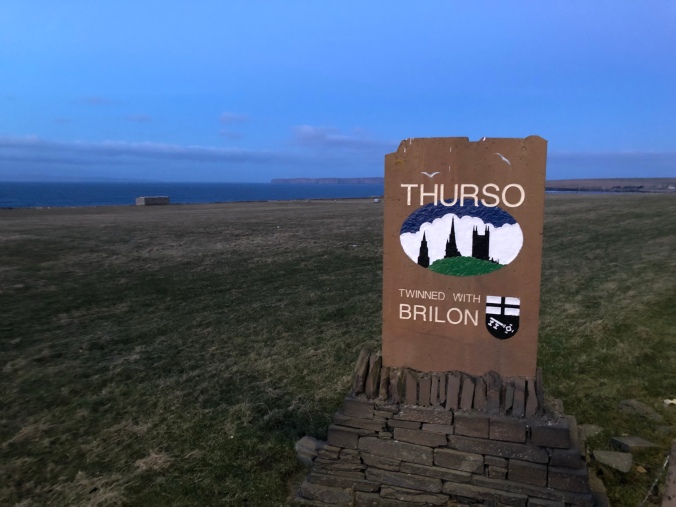 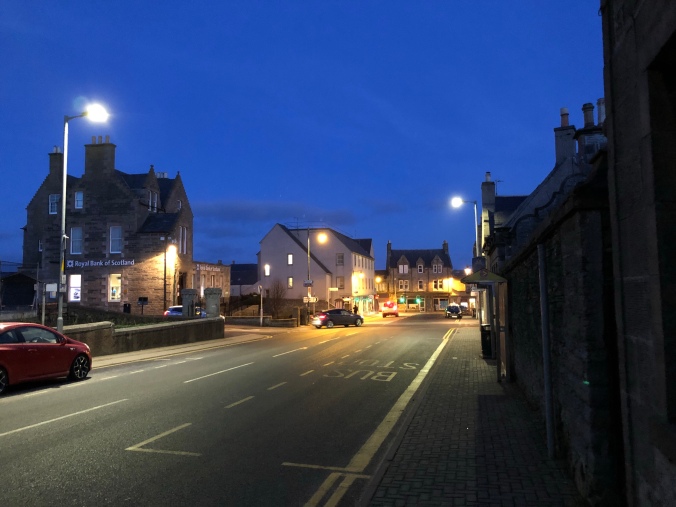 When I woke up this morning, I was excited to attend church. I checked on the church’s website, and they said there was a congregation close by that had an 11:00 service. Since I had to be out of my hotel by 10:00, I found myself about an hour early to church. I knocked on the door to see if I could wait inside, but nobody answered. So, I hung out front for the hour. 11:00 came and went, but nobody showed. I decided that I would make my way to the bus station and ride to my next destination. 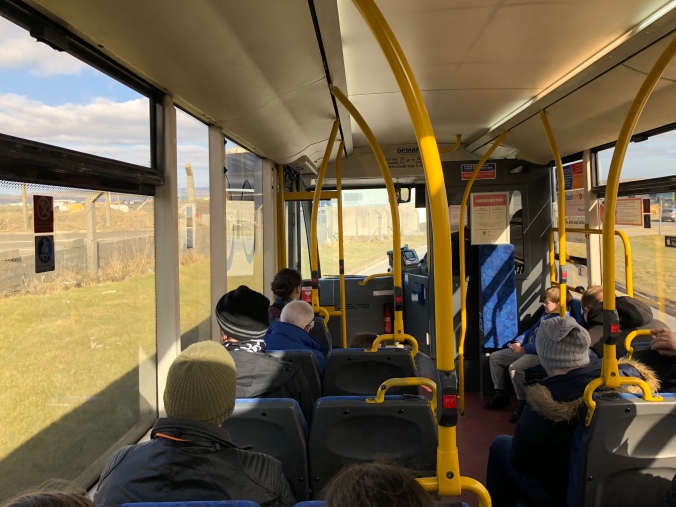 Stromness is on the west side of Orkney, only about 20-25 minutes on the bus. I had come here about seven years back with one of my hostel roommates. We did a little bit of exploring but ended up going back to Kirkwall later on that evening. My favorite memory from this town is when I went to pet a small, orange cat. The cat didn’t want me to pet it, but I did want to ride. It walked behind me and jumped up on top of my pack (see post). As I walk the same street earlier today, I was hoping the little orange cat might show up. Sadly, not one did. 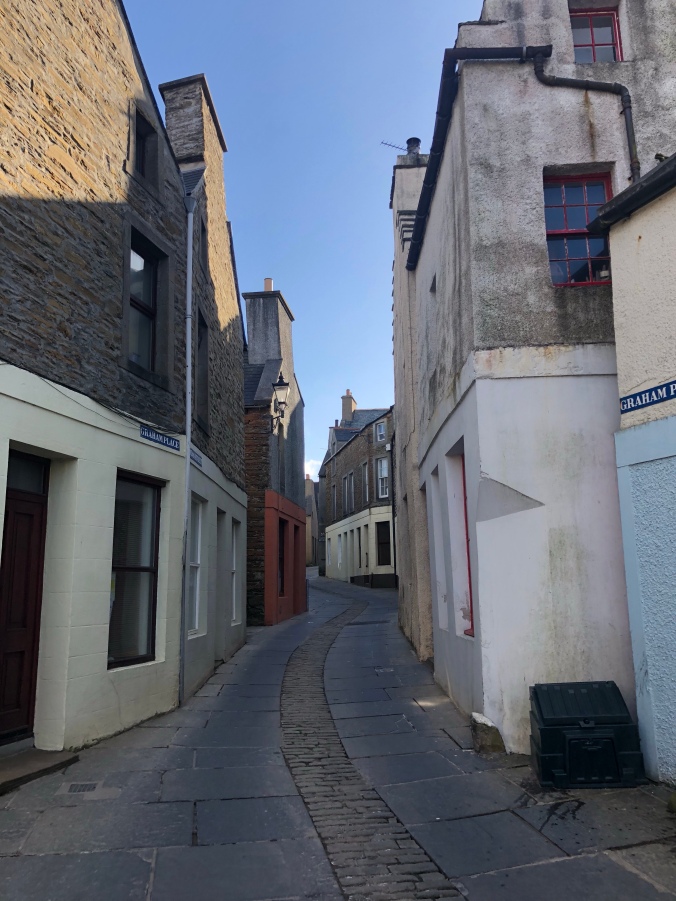 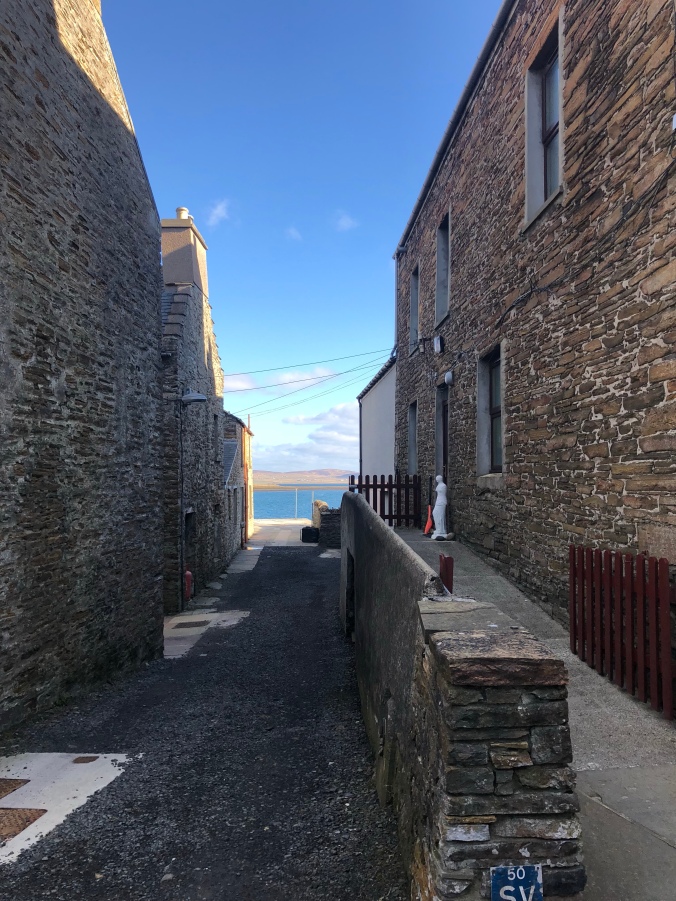 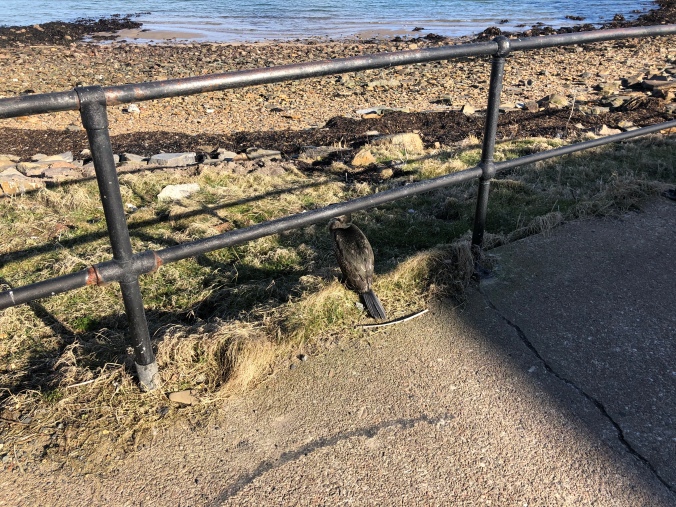 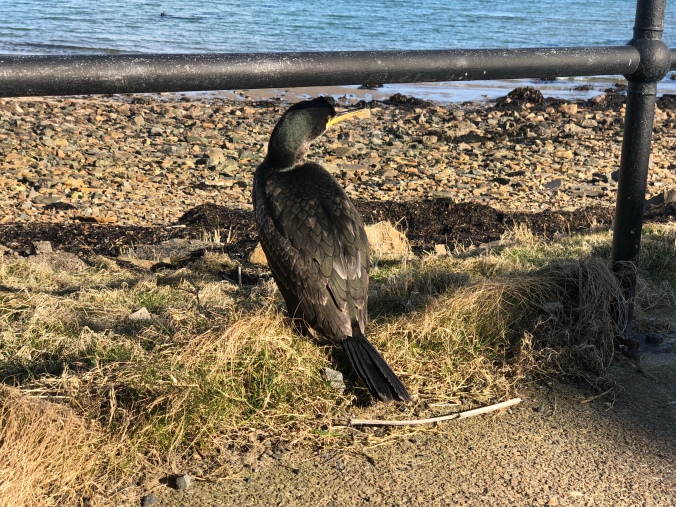 Before my walk, I had to get something to eat for lunch. Since I hadn’t had breakfast, I was starting to feel low blood sugar. I sat down and had the hotel restaurant’s “Sunday Special,” three courses for only £12.95. My meal was incredibly delicious! 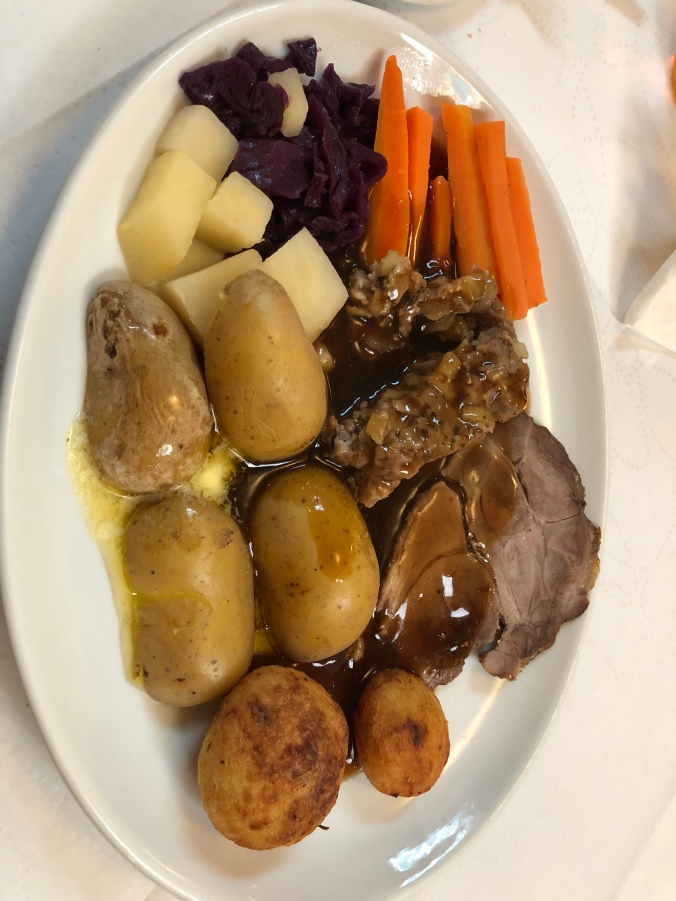 My evening has been a good one. I decided that I would stay inside, not that there’s anything to do in Stromness at night. I imagine a few pubs open, but there’s nothing for this non-drinker to do. So I had some dinner, and I’m going to call it a night. 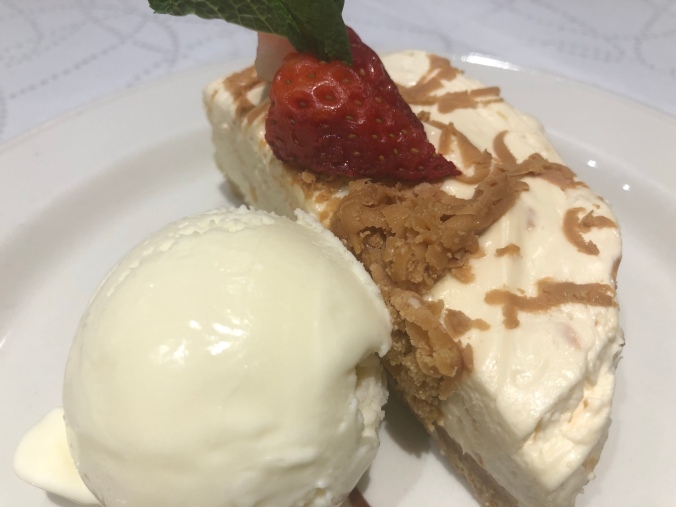 Today has had many high points, and also a few not-so-high points. I knew that this would be my last day on Orkney so my goal was to get out and see some more of it. I was bound and determined to do this. Last night I sent a Facebook message to Soeren that basically said I would plan on being at the bus station at 09:30 and if he wanted to come
explore with me, he could.

I woke up really early and packed up all my clothes and things. I had asked one of the front desk workers if I could leave my big bag at the hostel throughout the day, that way I wouldn’t have to carry it all over. She told me that it was fine and that the only thing I needed to make sure of was to be out of my room before the 10:30 checkout time. I had no problems with that.

A few minutes before 09:00 I left my big bag of clothes near the front desk and took my smaller backpack with my iPad and other things with me. I stopped at Tesco on the way and bought 2 butter crescents and made my way to the bus station. Soeren got there right at 09:30 and we decided that we wanted to go to Stromness, on the other side of the island. He had been there the previous day, but was short on time- so he didn’t have the chance to really explore it.

About half an hour later, we were on the bus. Orkney isn’t that big of an island, but I didn’t realize how small it actually was. It was only 16 miles to Stromness, so we were there in no time at all.

On a Bus to Stromness

Stromness is the coolest looking port village, it is a lot smaller than Kirkwall. There is a main street that goes through the center of town and with all of the stone and rock buildings towering over, it’s almost like you’re walking back in time. Part of the street was even paved with some kind of cobblestone. 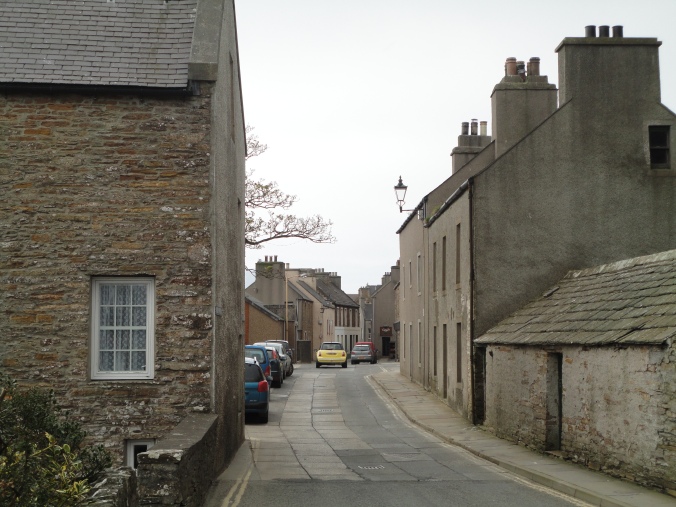 The Main Street Through Stromness

After exploring, we stopped for lunch at a bistro/cafe. I got some soup, a sandwich, and some white hot chocolate to drink. That hit the spot and soon we were off walking down the street again. 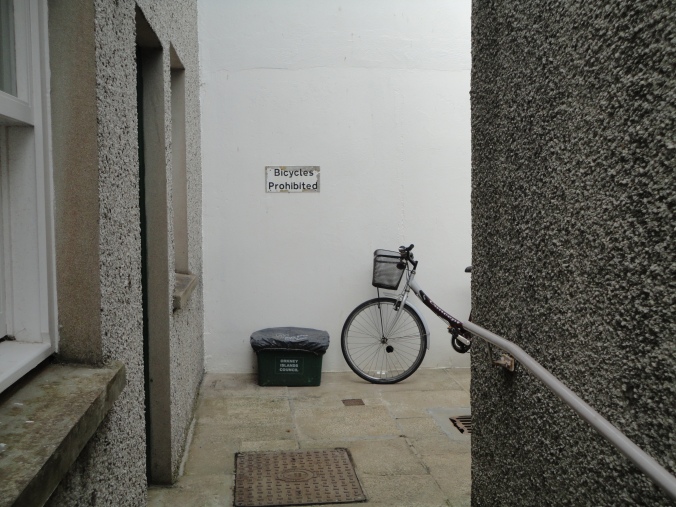 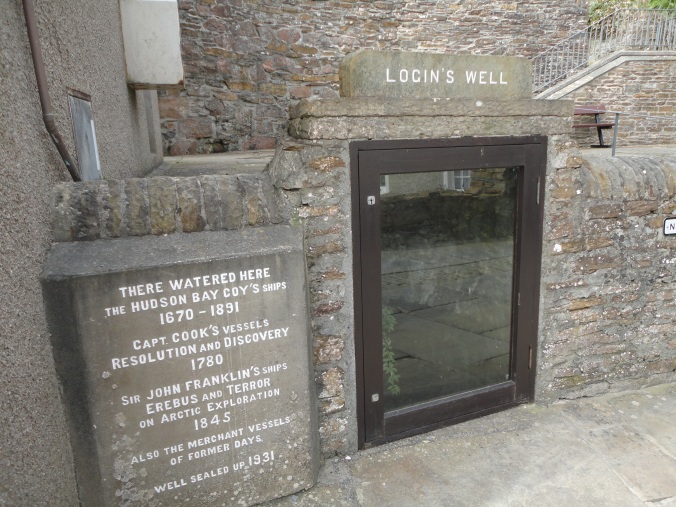 I had the funniest experience while walking down the street. I was approached by an orange cat. I thought for sure the thing was tame, so I kneeled down in the street to try to pet the thing. When I knelt down, however, I found out that it didn’t want to be pet. It wanted a ride. It quickly walked around me and jumped up on my backpack. The was the oddest thing! So, Soeren and I continued to walk down the street until this cat had decided it was his stop, and it jumped to the street and mad it’s way down an alley. It was the wildest thing! I still laugh when I think about it. 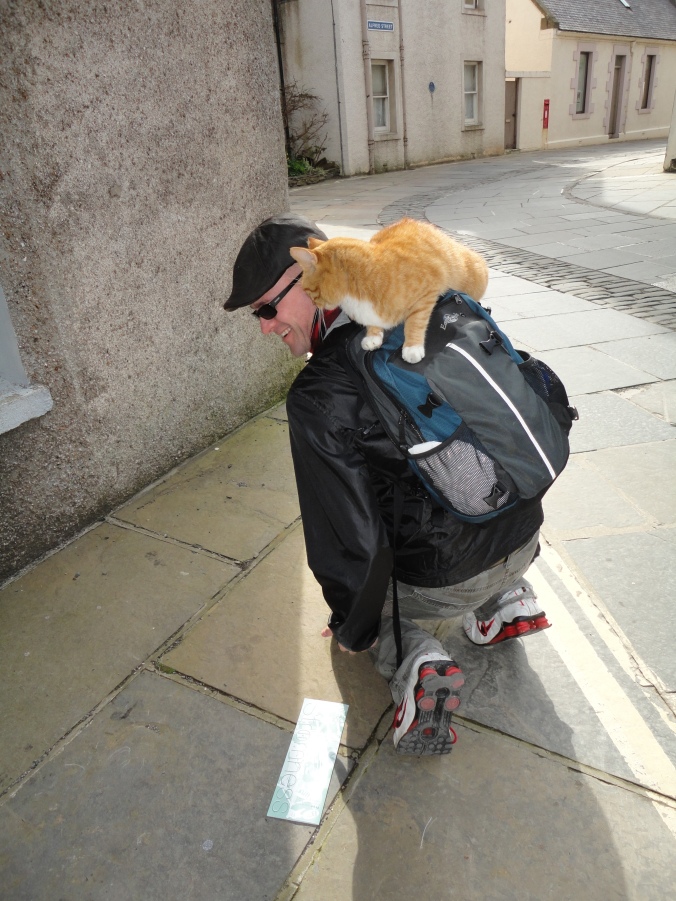 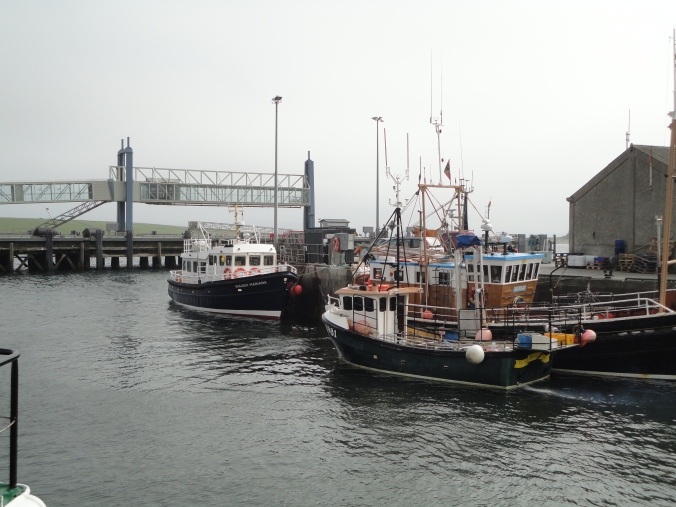 On the south side of Stromness, there is a golf course and just past that is the ocean. We found a place where there were a bunch of seals resting on the rocks. We tried to get closer to them for a better picture, but they saw us coming and quickly went back into the water. We could see the beautiful hills of Hoy but didn’t have time to go across and get close. After going all the way around the golf course, we found an old farm road that took us back into the town.

A few hours of wandering around and we were back on the bus that took us back to Kirkwall. They dropped us off near the Tesco and I thought it would be good to grab something that I could fix for dinner so I wouldn’t have to come back to town for a restaurant later. I found some pasta and bought it. Since Soeren’s hostel was further away than mine, I suggested he come with me to mine and that way we could relax
for a few minutes before he’d leave and go fix his own dinner.

So- we’re sitting there talking in the living room and in comes one of the front desk clerks. He asked me what we were doing. I said we were just chatting. He asked me if we were staying in the hostel. I told him that I was and that even though I’d checked out this morning, my ferry didn’t leave until about 2345 so I was just going to chill here for a bit. I told him my name and everything. So he tells me in a very rude tone, “Well, it would have been nice if you’d of let us know you were coming back.” I told him that of course, I was going to come back because my bag was here. Plus, the other lady who works with him told me that as long as I was out of the room by 10:30, then it was fine.

So now he’s obviously upset with me just because there was no communication between him and the person I’d talked to before. After he leaves, I tell Soeren “Screw this. We’re obviously not wanted here!” We grabbed our stuff and left the hostel. I didn’t want to head into town with my big old bag, so I told Soeren goodbye and left to walk about 2 miles or so to the ferry terminal.

What sucked was the fact that I could see a rainstorm coming in over the hills and I was still over a mile away. So I decided I had to up my pace a bit so I wouldn’t get caught in the rain. I finally get to the terminal, just in time. Instead of only having to deal with rain, it brought this thick fog with it also. I get here and it’s a little bit after 17:00 and there’s a sign informing me that the place won’t even open up until about 21:00. So I had to wait outside in the wind and the rain and everything.

I was finally able to make it to a shelter at least. Even though I’d have to still wait in the wind and the rain, at least I had a cover over my head. I would sit there and read my book but I couldn’t sit still for very long because it was starting to get really cold. So I’m
pacing, reading and shivering. It wasn’t fun.

Finally, at about 18:30 or so, a worker shows up and the first thing she says to me is “You know we don’t open until 2100, don’t you?” I smiled, chose a polite tone, and I ask her if I can just wait inside out of the wind. I told her I understood that I wouldn’t get to check in for the ferry for a few hours, but all I wanted was to get out of the elements.

Her name was Louise. She was the nicest person in the world and said that it would be just fine if I waited inside. She sent me upstairs into this waiting lounge. I’m able to sit on a nice patted chair and wait here now. There’s even a vending machine with drinks and candy in it! She gave me the remote to the television so I could watch if I wanted too. My favorite person of the day is Louise! I’m in here now thawing out, munching on a candy bar. Too bad my ferry doesn’t leave for another three and a half hours.

I just boarded the ferry and at this very moment we’re pushing out to
sea. I’m crossing my fingers that the waters will be still! I’m going to
try to sleep now.