When we finally landed in Philadelphia, we were about twenty minutes late. I’m surprised that we weren’t even later than that. All I’m going to say about this first day is that I’m thankful for those passengers who actually pay attention to what their flight crew has to say. Some of these passengers fly for work, so they’re on so many flights-they could probably quote our safety demonstration as well as a seasoned flight attendant. Still, they put down their book or their paper, they take their earbuds out, and they pay attention.

I laid in bed on Monday morning until about 09:30. Having slept only about two hours the night before, I will take whatever sleep I can get. Just before 11:00, I left the hotel to go to Jim’s, my current favorite spot for cheesesteaks, when I come to this city. It’s only the third or fourth place I’ve tried, so I’m not an expert. The sandwich is excellent, however, and the service is phenomenal! I recorded the visit live on Periscope so you can take a look- I’m sorry the video is so long- if you’ll jump to about nine minutes and thirty seconds in, that’s when I arrive at Jim’s- check it out!

After leaving Jim’s, I had an excellent experience- I had planned on heading over to Shane Confectionery on my way back to the hotel, as I had done the last time I was in Philly, and grab some sweets to take to my crew. Unfortunately, it started to rain- even though I love the rain, this was a heavy downpour! I had to hide in the lobby of a bank because I was getting so drenched. I thought this much water might destroy my phone. I don’t know about you, but I never travel with a bag of uncooked rice for such disasters.

I made it back to the hotel, and luckily my phone still works. Maybe God sent the rain to tell me I’ve been overeating junk food, and I’m probably going to lose my foot to diabetes one day. All because I chose to go back to Shane Confectionery. Oh well- I’ll stay dry for now.

When I got downstairs to the lobby, I found out that our first leg from PHL to MDW had been canceled. This sometimes happens when there is some sort of disruption to the normal operations of an airline. So- the crew split up with the promise of being reunited on the third day of the trip. Rather than deadheading us across the country to Ontario, where we were supposed to end up, scheduling decided to use all three of us as reserves. My day was long, as I had two deadheads and only was assigned to work one leg from Dallas to Oklahoma City.

This means that I didn’t actually have to work the first two. Some people like this, and even though it’s lovely to relax. Sometimes, this actually wipes me out more than actually working the leg does. It’s because I’m not using very much of my energy, and it seems to make the day seem longer than it actually is. Thank goodness I had a movie downloaded on my iPad. Oklahoma City was nice, but I really didn’t have time to do very much at all. My overnight layover was short, and before I knew it, I was off to the airport to work.

Again, deadheads! I was only asked to work two out of the four legs assigned, making my day seem very long. They had scheduled me for only 17 minutes between my Las Vegas and my San Jose flights. This means that as I hurried to my gate, all the passengers were standing there, lined up, just waiting for me so they could start the boarding process. Then during boarding, about fifty people asked me why I was late. Once everyone was on board, I announced, letting everyone know that the flight had been delayed out of Las Vegas due to air traffic control issues. This is normal for Vegas.

When our plane got back to Las Vegas, I had a message to call scheduling again. They told me that I was about to go over my maximum duty day, so instead of working back to Denver, they pulled me and put me in a hotel for the night. So my crew went on, and I went to the hotel.

Maybe I’m getting older, but Las Vegas seemed so much hotter than it had ever been in the almost year that I’d lived there. It was dark out, and it still seemed like you could fry an egg on the street! You probably couldn’t, but that’s what it felt like. I crossed the street to find a late dinner. I walked to an Indian restaurant that I really like and discovered that it was gone/moved. Luckily, I noticed an Asian barbecue place that I had never been to before. It was so delicious! 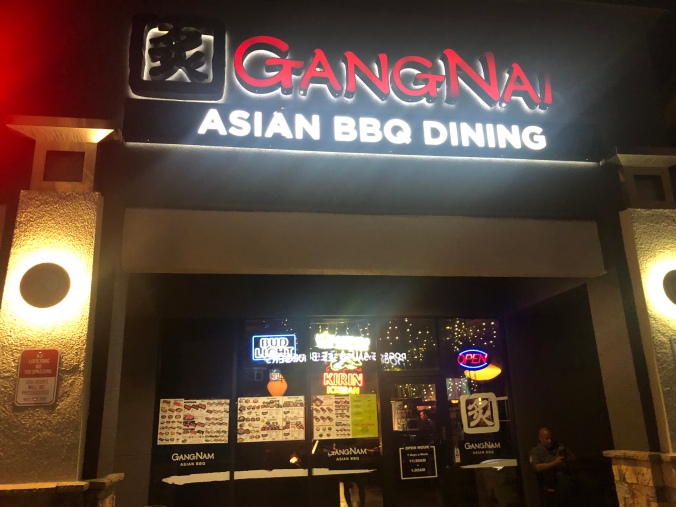 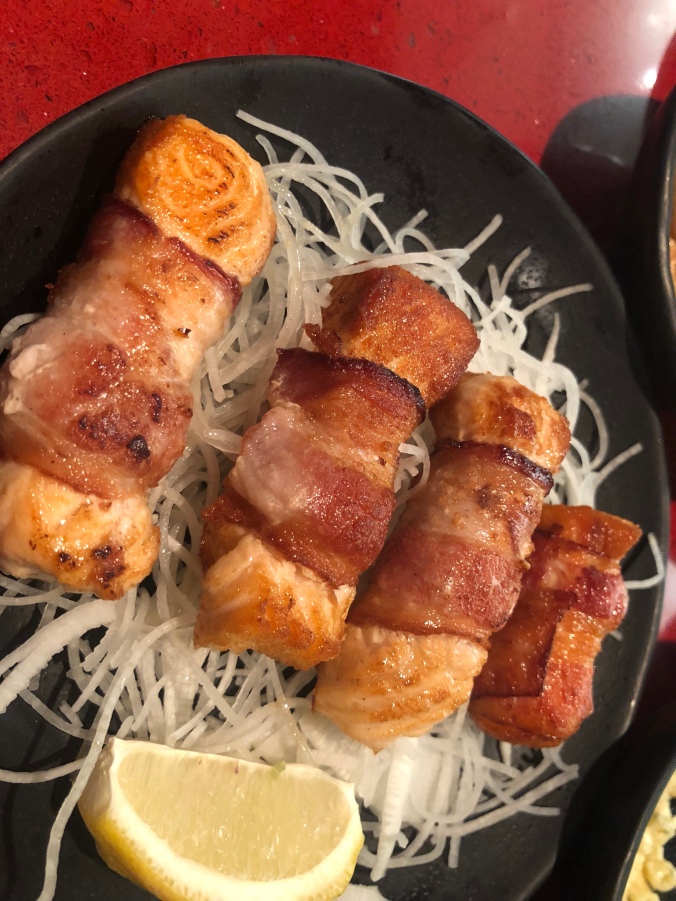 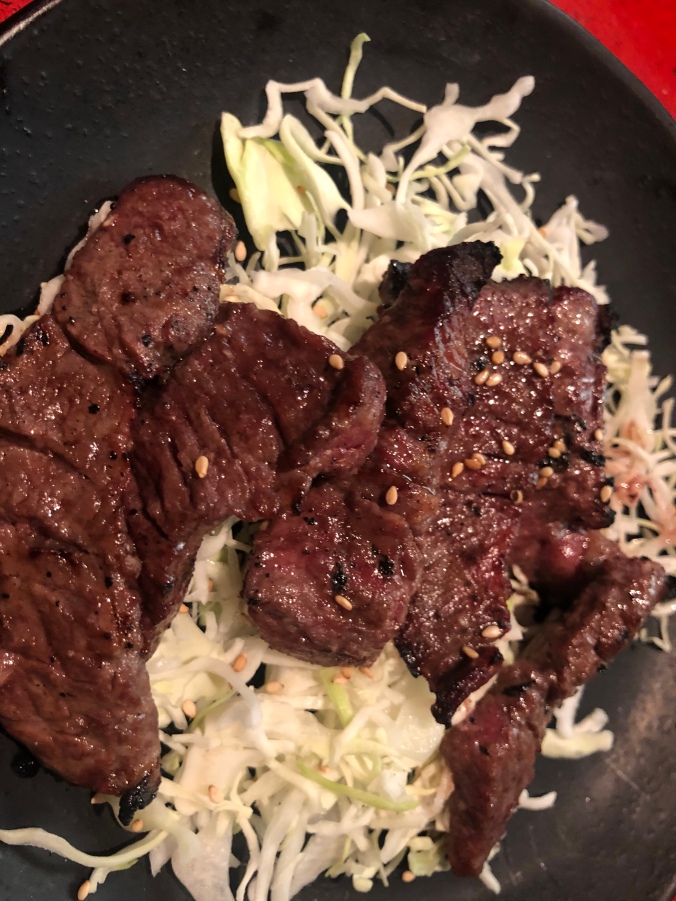 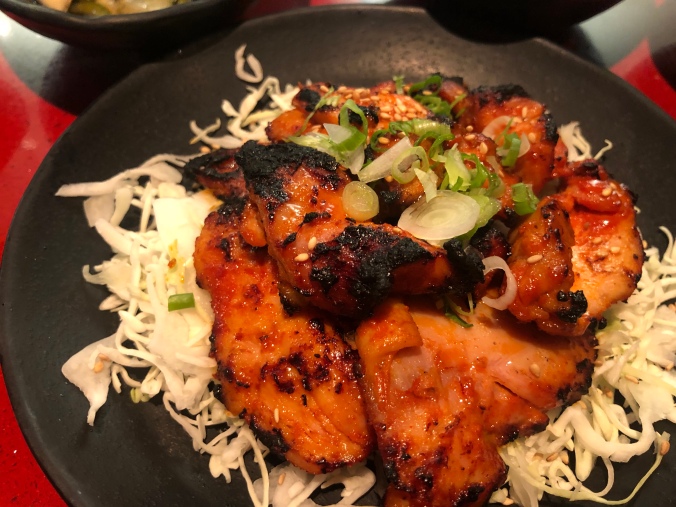 I only ended up spending about $20 and got utterly stuffed! Next time I know not to order as much. I recommend the spicy chicken as your protein (not sure if that’s what it was called on the menu). I was char-broiled, so it had the crispy texture going on. Amazing!

Being extended out to a fourth day on a 3-day trip means I could either get a prettier paycheck or have them pull a day from another one off my trips without pay. I chose the bigger paycheck. Finally- one more deadhead back to Denver. It’s a great feeling being done by about 07:30! This way, it feels like an extra day off!

After being off for [almost] two days, I had two easy, on-time legs to Buffalo. Even though I got along with the crew well, we didn’t do much on the layover, other than a quick meal. The Aloft, right across the street from the airport, has very nice, very modern rooms. My visit was just under eleven hours, and so I didn’t get to do much. I ended up only getting about four hours of sleep because I couldn’t clear my head. This happens to me when planning future travel.

Today was another easy day. Some flight attendants prefer short/quick flights. I decided that the fewer flights I have to work in the day, the better. Since the only annoying part of my job is waiting for passengers to board the plane, the fewer boardings I have to witness, the better. Since I only had to work two legs today, it was a brief two-day trip like yesterday.

It seems that work has me staying in a pretty good hotel here but in a not-so-good location. My dinner choices were either the hotel bar or a nearby Mcdonald’s. Since this Mcdonald’s has a higher restaurant review online than the hotel bar (according to Yelp.com), I decided to treat myself to a “classic” dinner. It’s probably been about 14 years since I’ve had a Big Mac. They really don’t taste any better than they did back then. At least I can have a McFlurry for dessert.