Last night I got to hang out with Neil, Andy, Matt (from Australia) and Hannah (from New Zealand). They are all incredible and we had a great time. I hope we can keep in touch when we part ways.

Falling asleep was a bit difficult last night. After a while, once the coughing stopped, I finally was able to sleep. I probably got 5 to 6 good hours of sleep and for me, in a hostel, that’s excellent.

It’s partly cloudy and a little windy today… sprinkling a bit, but I’m sure it will blow over soon.

Today I hung out with Andy again. His ferry leaves tonight to go back to Aberdeen, then he’ll go to his place in Edinburgh for a few days- then he’s off on his next adventure. We went to the chip shop and got fried pork and chips. It was pretty good, but I think I’ve had my fill of fried food for the time being. Next, we went to a museum on the edge of town. About the first half of it was quite fascinating. We learned about the early settlers and the occupation of the islands. They have also unearthed some remains of these peoples’ homes.

I was able to get a bit of rest, but nothing major. Andy is now on his twelve-hour ferry back to the mainland. He’s a good guy I’m sure I’ll miss. Tonight I hung out with Soeren who is from Germany. We walked together to Tesco, the local supermarket, to grab dinner. I grabbed some fresh ravioli and pesto. It turned out to be a pretty good meal, too. Soeren and I both will be on the ferry tomorrow evening.

I think I’m going to really miss Neil. He’s incredibly nice and great to chat with. We had some fun times these past two days. I hope to keep in touch and to see him the next time I’m able to come to Scotland, whenever that is. What a great day today was. I’m so blessed to have made these new friends.

I forgot to mention that I had Indian food again for dinner last night. It was good, except I told my server that I wanted something spicy- but it was way too spicy. It was insane! I couldn’t even taste the food because of all the burn. I had them make the dish a second
time with less burning. 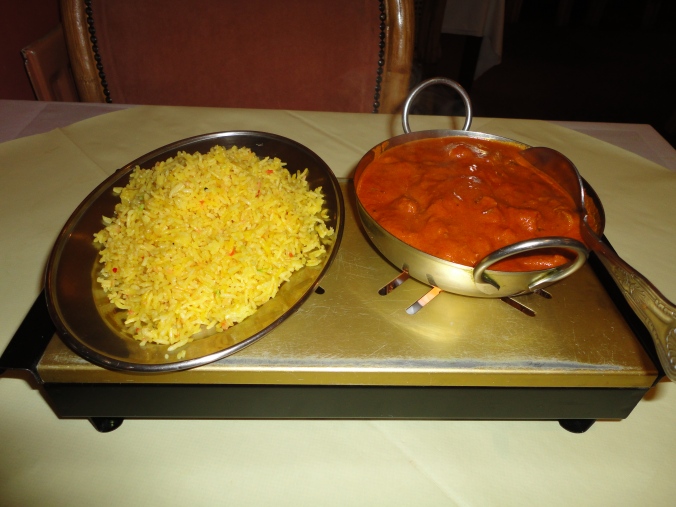 I needed to run into town and find something to take care of my cough. I worry that it has been keeping my hostel mates up at night. They say it hasn’t, but I wonder if they’re just trying to be polite. At this moment, I’m on a wonderful drug called Sudafed.

Today has been a blast, so far. We got a new guy in our room. His name is Andy and he’s from Tasmania. He has been traveling all around Europe for the last 3 years- and has been so many places. At the moment, he is living in Edinburgh working at some college. He asked me this morning if I wanted to go with him to Sumburgh on the bottom end
of the island. I thought a day trip would be a blast. Our goal was simple: Find a puffin and take its picture.

The bus ride cost us under 3 pounds to get down there, so it was a great deal. The bus dropped us off near the Sumburgh airport and we hiked out to the cliffs. Sadly, we found no puffins, but there were some breathtaking views of the area where the North Sea meets the Atlantic ocean. We climbed down the steep incline to see the rocks below as well.

At the top of the southernmost hill, there was a lighthouse. We walked up top to take a look around and there was a local man called Newton who was working there. He was a member of some British Society for Birds… or something like that. He knew so much information about the puffins as well as all the other birds. He was incredibly nice and
told us that on Sunday, he and his son counted about 270 puffins. That would have been a sight to see, but sadly, we mostly just saw seagulls. There were a few wild rabbits, however. 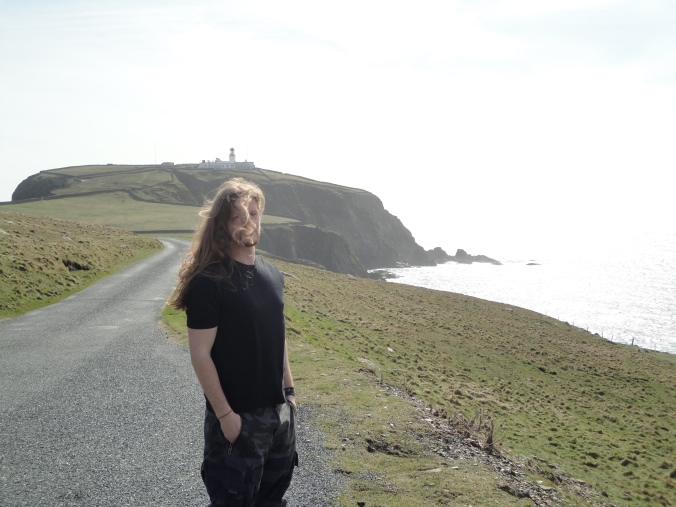 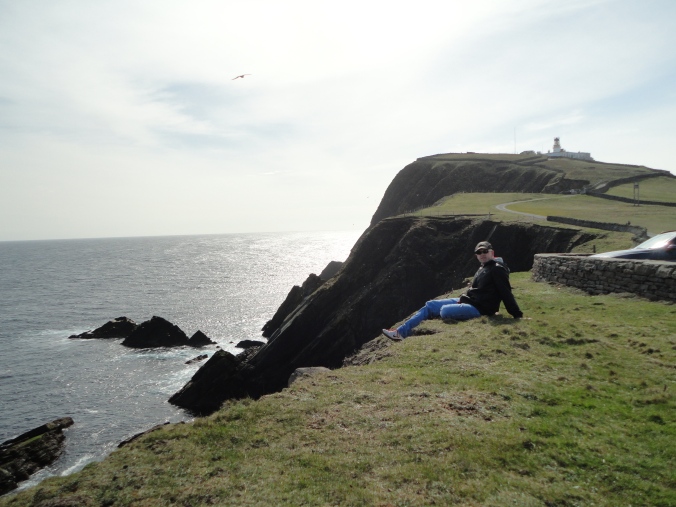 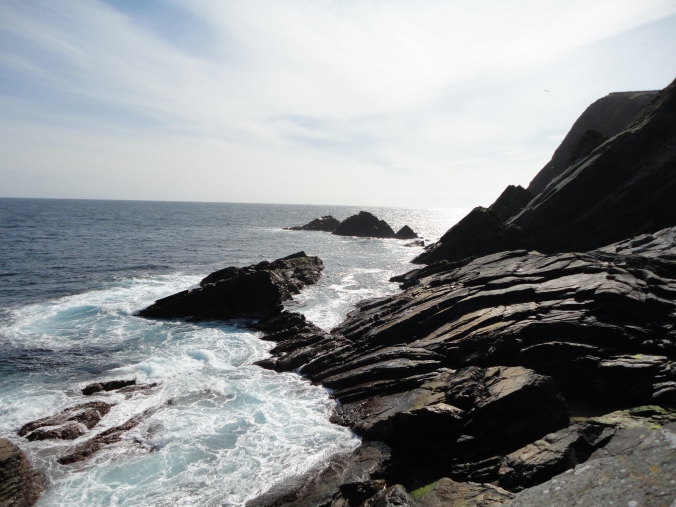 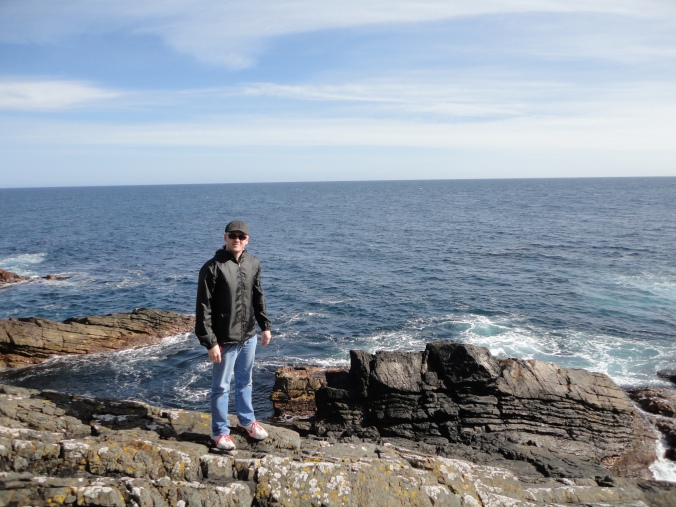 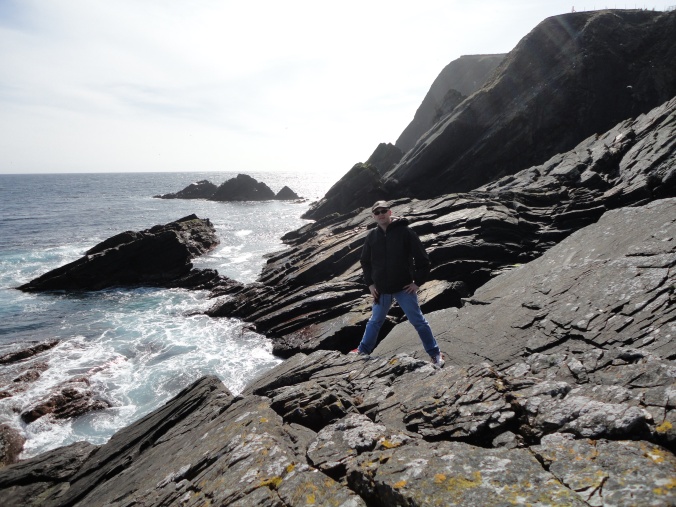 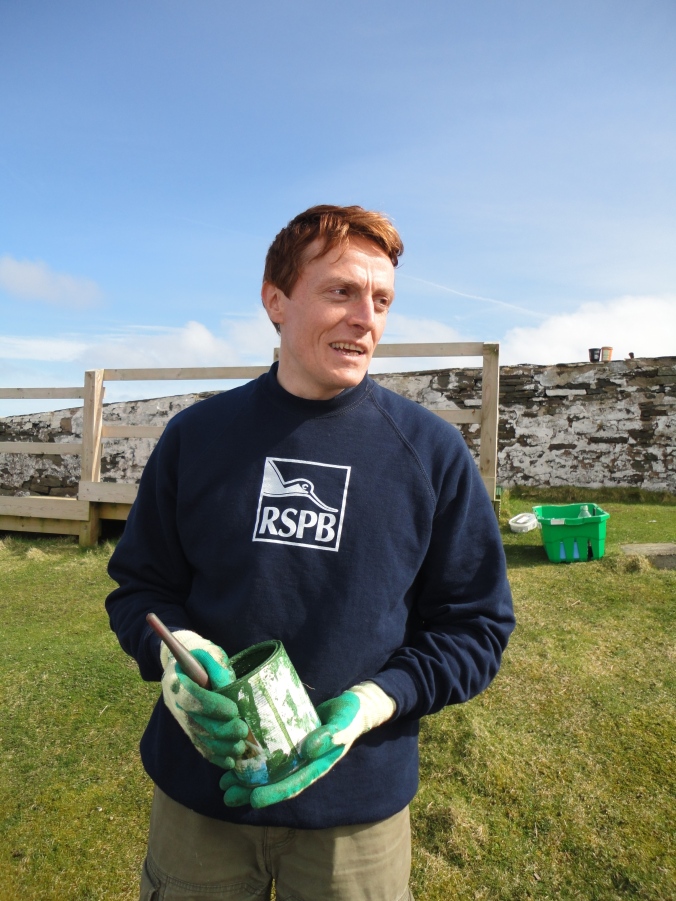 When we got back to Lerwick, we grabbed some fish and chips for an early dinner. We ate dinner sitting on the side of a ship dock, dangling our legs over the edge. It was fabulous. Now Andy has gone with Neil (my new friend from Stirling) to go rock climbing. They’ve been instructed to take some picture before falling off the side of the rock. 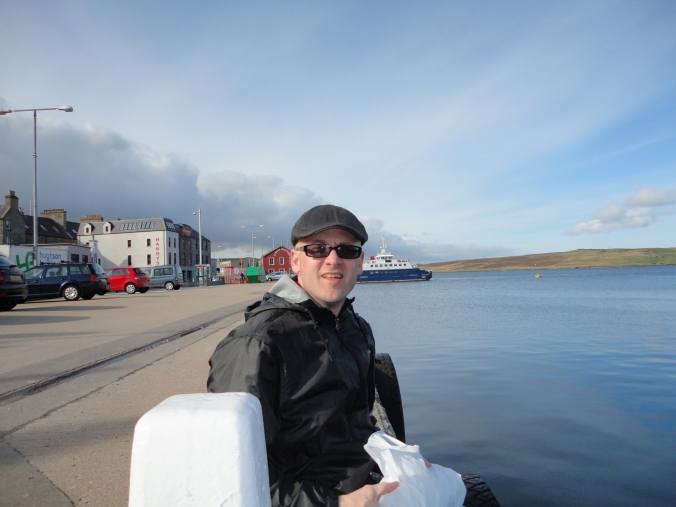