Today was absolutely amazing! As I walked around exploring Limerick, I came across a barbershop called Modern Man. All of a sudden, a memory came back from my trip to Ireland, eleven years ago. I was just leaving a small town called Sixmilebridge, waiting for a bus. This bus was going to take through Limerick and to my next destination (I think I was heading to Cork). While at the bus stope, I started chatting with a man called Colm.

The only reason I remember meeting him is because I snapped a picture of him, and over the last eleven years, I have occasionally come across the picture. I don’t remember what we talked about, but he sat near me not he bus and we chatted all the way into Limerick. I remember him telling me he was a barber at Modern Man. I remember seeing him walk into the shop as the bus pulled away.

So, all this came back to me in such a fast memory… I was wondering why this was happening. I figured this was a good enough excuse to go in and get my haircut freshened up. I walk into the room and a lady is cutting someone’s hair. I ask if she takes walk-ins and she says she does, so I sat down to wait my turn.

A few minutes later, the guy has left and I sit down in her chair. As she’s working on my hair, I tell her about my memory of the man that works here… before I could say his name, she asks me, “Did he have a tattoo on his neck?” I was trying to remember what the picture looked like, so I told her I wasn’t sure, but asked if she knew anyone named ‘Colm’. She says she does know him well.

She tells me that he no longer works here, but he has his own shop in Shannon, Ireland, not very far from Limerick. She tells me that he was getting such a demand for his haircuts that he needed his own place, but he stops by Modern Man from time to time to say hello. I’m amazed now that she not only remember him, but is still close to her. So, I tell her the story of our meeting eleven years ago.

She tells me that Colm is in a band, and they’re very good and very popular, in this part of Ireland. I’m laughing now, as she’s trying to cut my hair. She told me that the name of the band is “Protobaby”. So I pull out my iPhone and check to see if they’re in Apple Music store. Sure enough, they have a few albums there. So, I add the albums to my library. I sampled the music and they sound really good- they are an alternative/ rock band… I will really listen to their music soon.

I found the band’s facebook page and looked up Colm to send him a message. I heard back from him a few hours later- he said he was sorry that he didn’t’ really remember me, and I told him that’s ok, and the only reason I remembered him was because I took that picture.

So there’s my small-world incident from earlier today. Isn’t that the craziest thing? I’m hoping to get to one of his concerts someday. Any excuse to plan another trip to Ireland, right?

After leaving the shop, I headed back over to St. Mary’s Cathedral, that I had visited the previous day, but this time I actually went inside. Those stained glass windows were calling my name. The cathedral was so beautiful! I took the self-guided tour and learned a lot about the building. Yes, I’ll forget the stories, but I wont’ forget these windows! 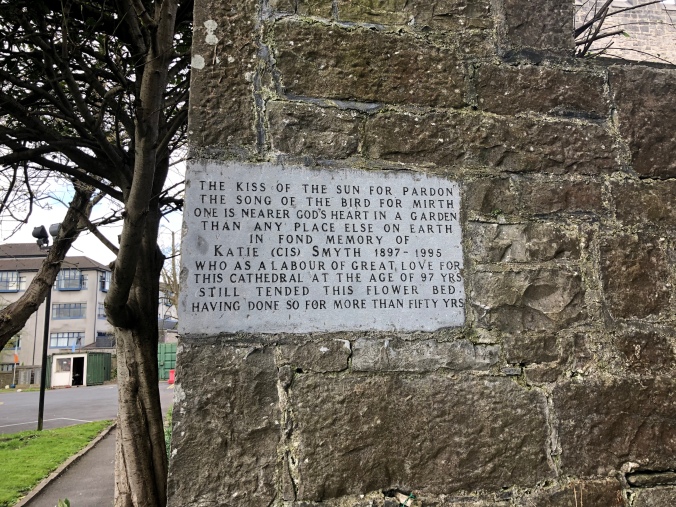 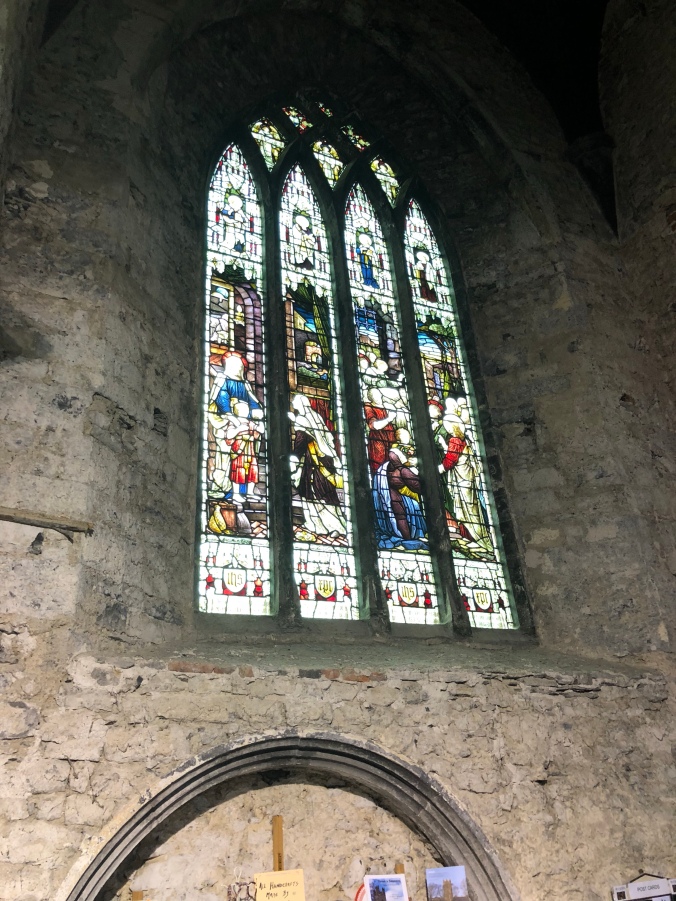 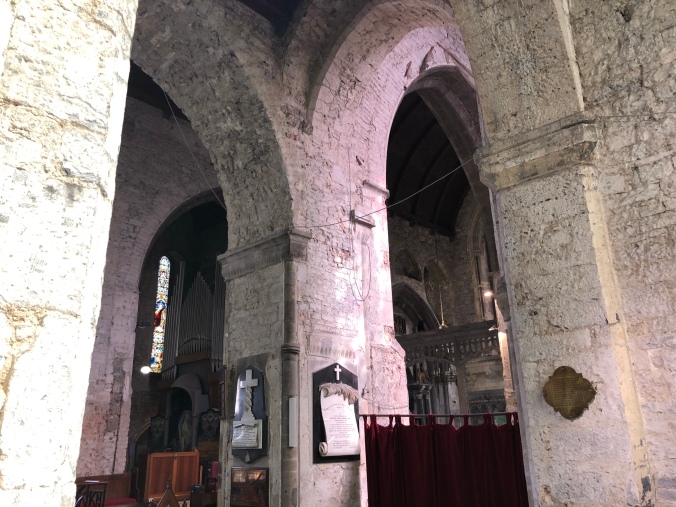 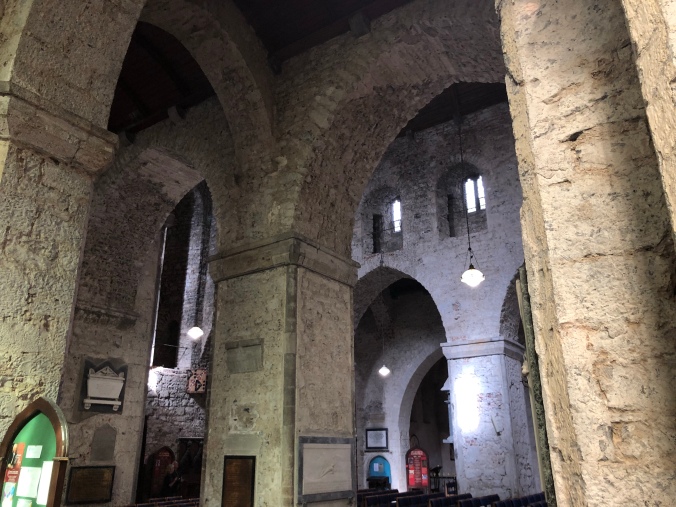 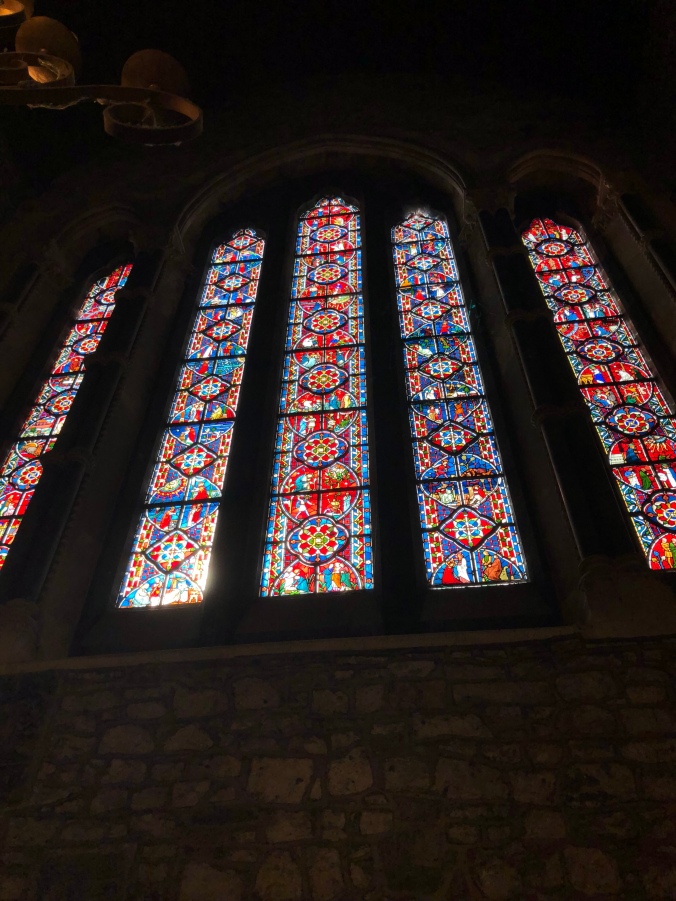 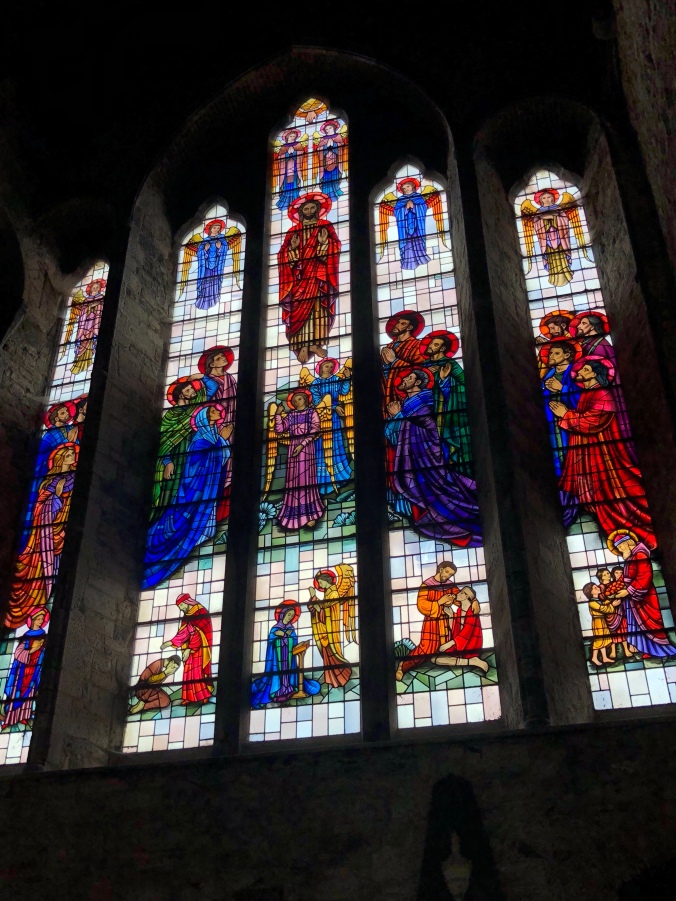 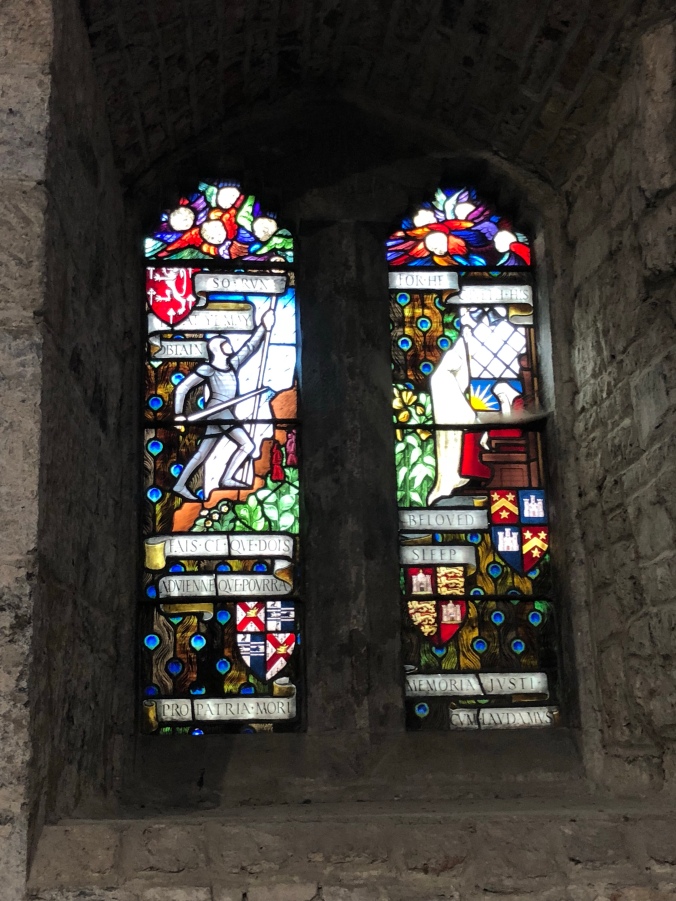 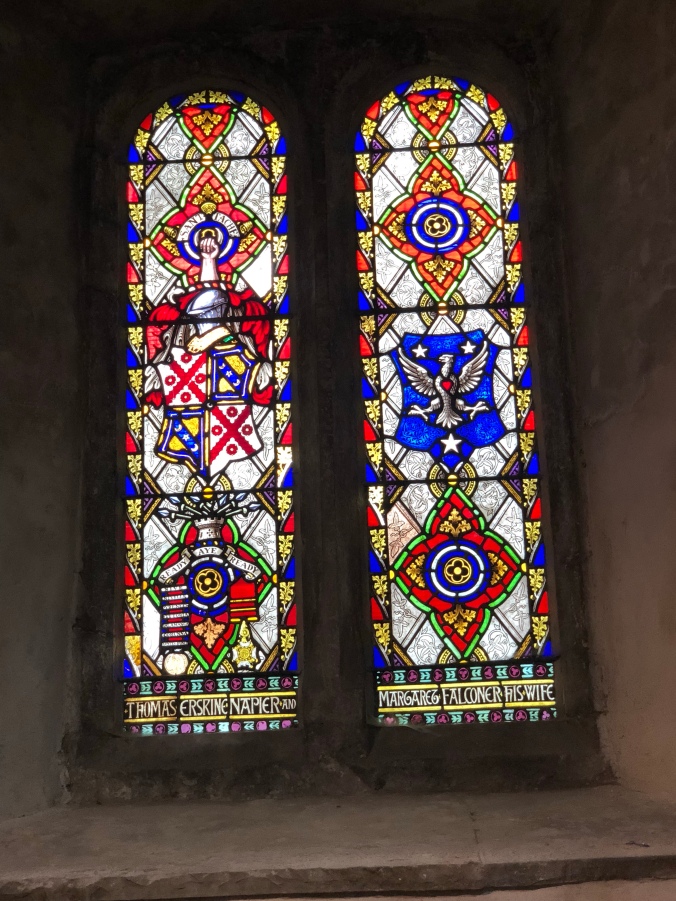 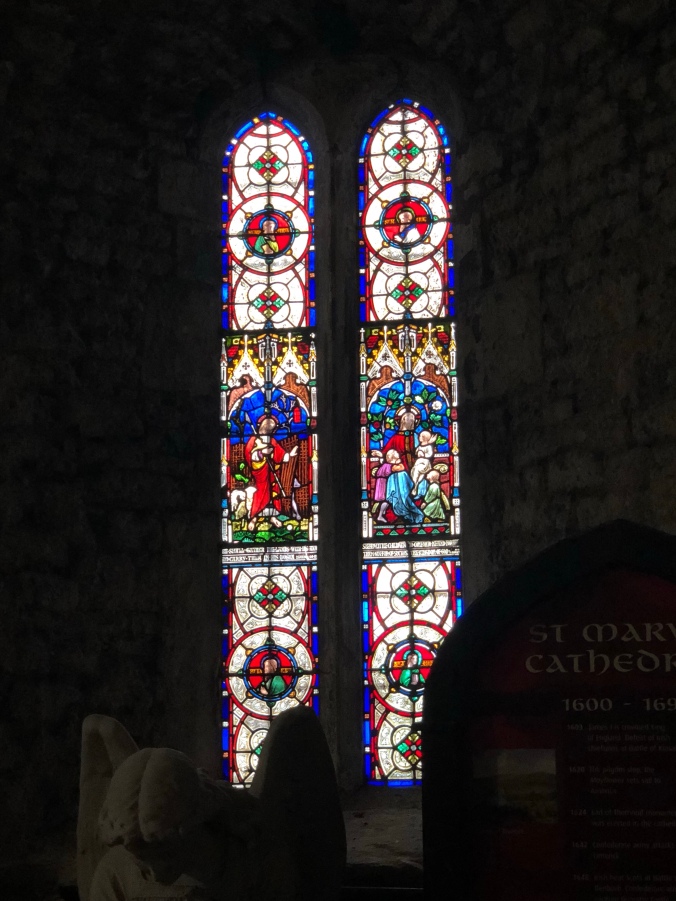 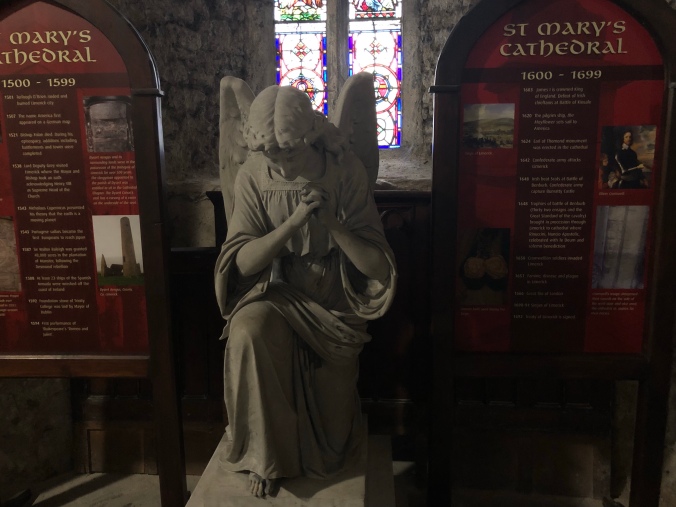 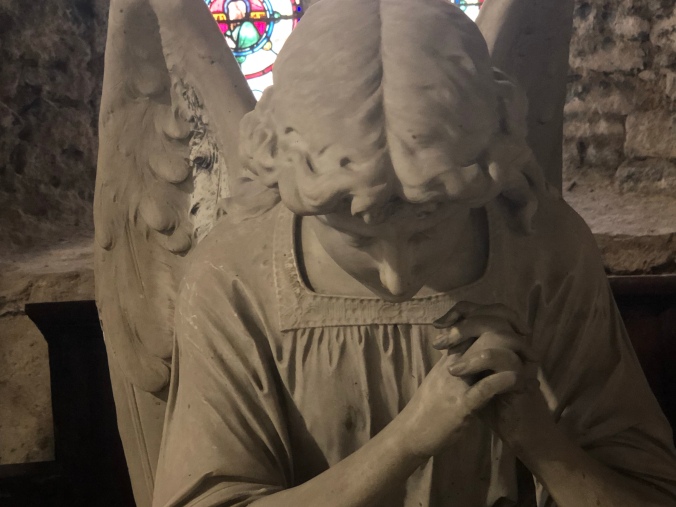 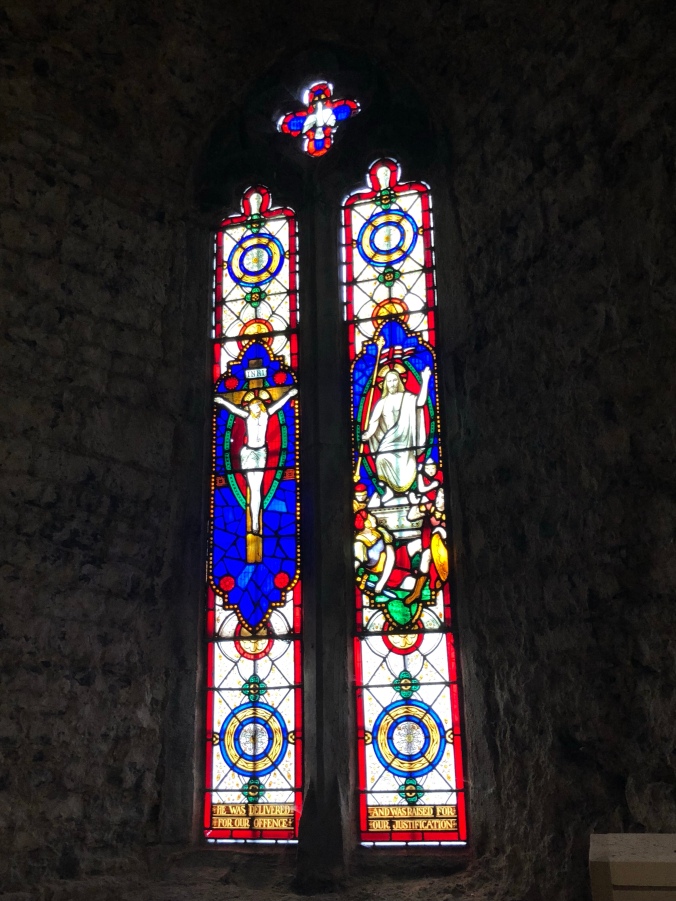 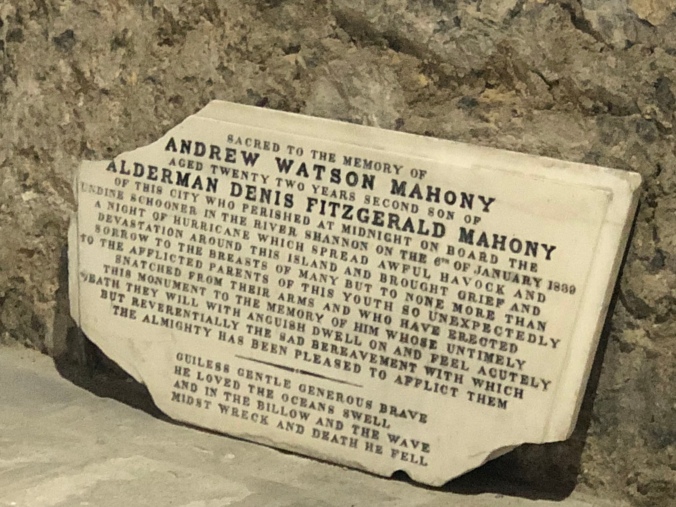 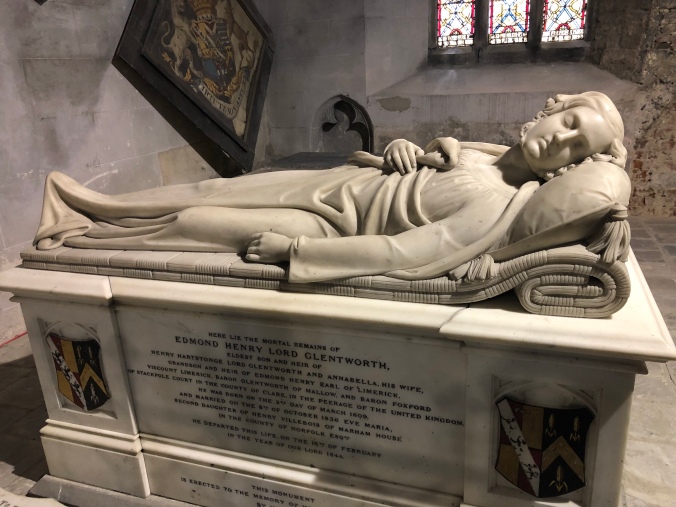 I continued down the road until I came to King John’s Castle, which was started sometime in the 1200s. It was cool to explore all around, including under the floors… they show you the original base- it was very cool, knowing that all these stones were placed there so long ago! 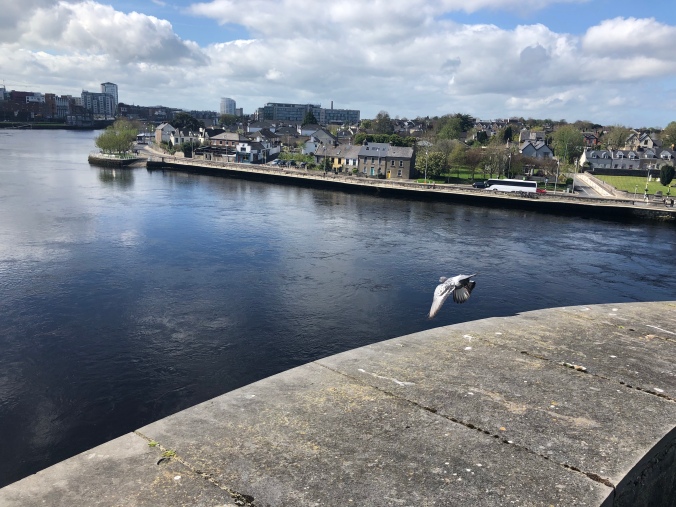 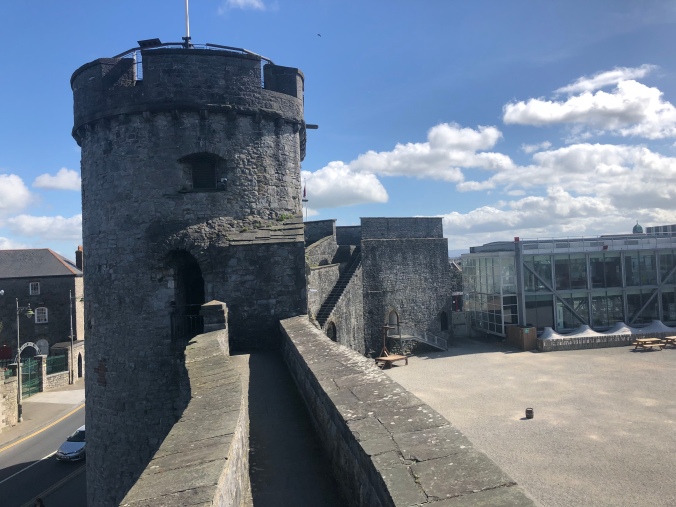 Dinner was at a restaurant called Katie Daly’s. This place is a tribute to the family of Katherine Rose Daly, who made a famous illegal moonshine during the days of prohibition. It was the funniest place to find a restaurant dedicated to her, as I didn’t see what the link to Ireland was. Katie ended up in prison in Alcatraz, being the only woman who ever served time there. Unfortunately, Alcatraz is the place she died.