Today was one leg to Los Angeles… I can’t believe that I forgot to post the last time I was here: It was a perfect day in L.A.! Since I had about twenty-three hours to kill, I decided to take a Lyft into Hollywood. I saw a documentary called Three Identical Strangers. It was all about a set of triplets who had been separated at birth. Two of them happened to meet when one attended the same college as the other, and then when their story made it into the newspaper, the third brother read the article and realized that he was the a brother as well.

The documentary was actually quite good- it looked at a certain foster care system in New York City and exposed them for having separated all these multiple births, all in the name of a very unethical science experiment. It’s definitely worth seeing, if it’s playing in your neck of the woods.

I got some breakfast at a place called “The Griddle”. I ordered some kind of pancake and when they brought it out, it was two cakes, bigger than my head! It was delicious, but I only made it about a quarter of the way through! I hated to waste all that food, but since my day was just beginning, I didn’t want to have to carry around a to-go box for the duration. Lesson learned. 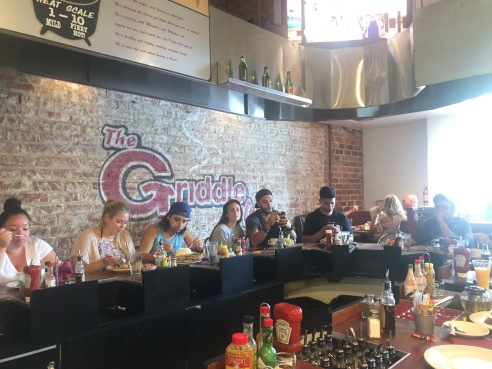 After that, I walked down to the Hollywood Walk of Fame. I realized that I hadn’t been there since high school. I was on either a choir tour or a band trip, walking the street and seeing the sights with my classmates. It has been long enough ago, that I don’t have very many memories of that trip. I do remember standing in front of the Chinese Theater, however. I also remember fat Spider-Man, skinny Spider-Man, and brown Spider-Man, who will allow you to take a picture with them, if you tip them, that is. No thanks. 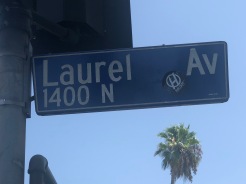 I was able to do a live stream on Periscope, but am choosing to not post that here, since things got a little ugly and political during the video. It had to do with certain stars on the Hollywood Walk of Fame, and my desire for people to stop being mean, and my rant in defense of a certain president. Luckily the taunts of the liberal class mean nothing as their viewpoint is largely emotional and based on opinions offered by the likes of one Whoopi Goldberg. Sister Act is over… and a lot of us just aren’t that into you.

Fast forward to today… This morning, I landed back in Los Angeles. Another long overnight means that I had time to have some kind of adventure. After changing out of my uniform, I called for a Lyft. I went into Santa Monica and saw the movie, Crazy Rich Asians. I gotta say- that was a great film! I will probably buy it once it comes out… well, once the price drops, that is.

After a stop at the Apple Store, I walked out to Santa Monica Pier. On my walk, I called to check on my parents’ I realized that today is their 59th wedding anniversary! Fun fact: My parents were actually married in Santa Monica, and here I was close to that very place! Sort of one of those full-circle moments… not really, but kinda.

Even with the L.A. smog, and the smoke from the wildfires, Southern California is very beautiful today! Everybody was out- If I could afford to live here… well, I still wouldn’t, but would be nice to have that kind of money!