On High Street, across from St. Giles’ Cathedral sits a man who makes his living by selling pictures that he’s taken. When I was here a few weeks back, I glanced at some of his work and was really impressed. I told him that I didn’t have any cash on me and said I’d think about coming back to buy one in the future. A few days later, I’d left Edinburgh, having forgotten all about this interaction. This morning I randomly thought about the guy and decided I did, indeed want to buy one of his pictures. This was the one I’d seen of Victoria’s Street, a road that winds down from next to High Street, to Grassmarket.

I made my way up the street a few minutes ago and saw the same guy selling his pictures in the same spot. I approached him to say hello and look through his photos again. I reminded him of who I was and that we’d met a few weeks back. He didn’t seem to have any recollection of me. He told me that people often say that same thing that I did, or that they’ll have to think about the purchase and come back later. They’re really not interested, but they don’t want to hurt his feelings.

I told him that I wasn’t one of “those people” and the only reason I’d walked up the hill was to buy his picture of Victoria’s Street. He smiled and thanked me. When I was looking through his pictures, I saw the one I was interested in but kept looking. Underneath a few others was a different picture of Victoria’s Street- and this one I actually liked better than the first one. Score! 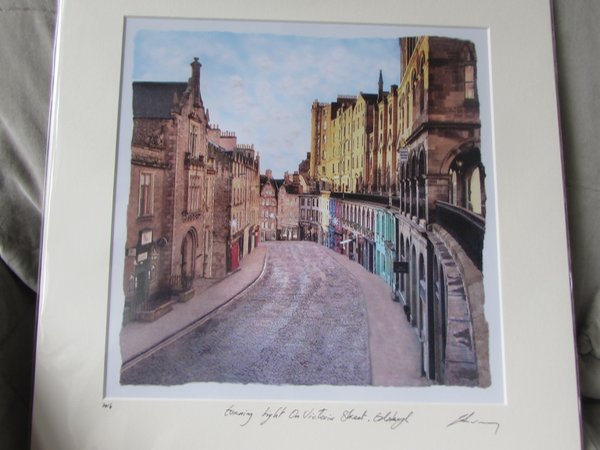 He actually had a bunch of other pictures that I really liked. Someday I may come back and buy another from him. I hope his business keeps so he’s here when I come back to Edinburgh in the future. I will drop my new picture in the post before I leave in a couple days. I can’t wait to hang it on the wall at home. I think I’ll have a nice frame made for it.

Back to the beginning of Scotland 5 | Forward to Scotland 5: Day 55